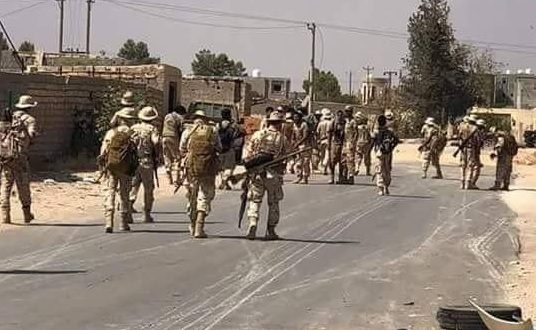 The Libyan National Army, led by Field Marshal Khalifa Haftar, said it was responding to an attack by forces of Government National Accord (GNA) in Saladin axis south of Tripoli.

The army announced it thwarted a militia attack in Saladin, pointing out that violent clashes led to their retreat. It also announced the death of two members of the militia led by Abdul Ghani al-Kikli, known as “Ghaniwa”, in al-Nagleyya axis. Those members were the last top commanders that Ghaniwa relies on during the battles.

LNA accused militias loyal to Fayez al-Sarraj, chairman of the Presidential Council, of smuggling prisoners to participate in the clashes inside Tripoli, which coincided with the United Nations’ confirmation that hundreds of immigrants were released from detention centers.

The residents of the capital, especially those in the vicinity of Abu Slim center, were surprised by the influx of migrants to the streets, carrying their bags, amid security tension and the sound of heavy artillery from the city center.

An LNA official said that the release of the migrants in this way means GNA is attempting to raise the concerns of international organizations in the hope that they will pressure the army to accept the ceasefire in Tripoli.

The official, who asked not to be identified, predicted that some of these would be on their way to join the armed militias, in an attempt to compensate GNA’s heavy casualties during recent clashes in Tripoli.

Both, the government of Sarraj and the United Nations Support Mission in Libya (UNSMIL) did not issue any statement on recent developments.

UN refugee agency, UNHCR, announced that at least 200 of the migrants made their way to a center for processing resettlement cases set up in Tripoli, where they were seeking access.

The International Organization for Migration (IOM), another UN agency, said 600 had been released from Abu Slim center.

“Their safety is of major concern as armed clashes continue in Tripoli,” announced IOM.

The Organization said it was concerned about their fate, especially as clashes intensified in the city, and that its teams were working in coordination with UNHCR and the World Food Program (WFP) to provide essential assistance and relief to Abu Slim migrants.

The migrants were seen near the center surrounded by guards and covering their heads, and after two hours later, residents began posting online pictures of them on the streets.

It is still unclear why the migrants were released or where they will be transferred to, with several thousands held in detention centers that are officially run by the Tripoli government. However, migrants, aid workers, and human rights defenders said the centers were effectively controlled by armed groups.

Several detention centers have recently been closed after international pressure, while migrants intercepted at sea by the EU-backed Libyan coastguard are being released instead of being transferred to detention centers.

The UNHCR center, known as the Gathering and Departure Facility (GDF), has been plagued by problems since it opened last year.

More than 880 immigrants at the GDF arrived “informally” after fleeing from another center in Tripoli that was hit by an airstrike killing over 50 of them last July, UNHCR Special Envoy Vincent Cochetel told Reuters.

Tripoli
2019-10-31
asaeid
Previous Russia in the Middle East: Jack of All Trades, Master of None
Next Sirte Protection Force arrests migrants smuggling ring