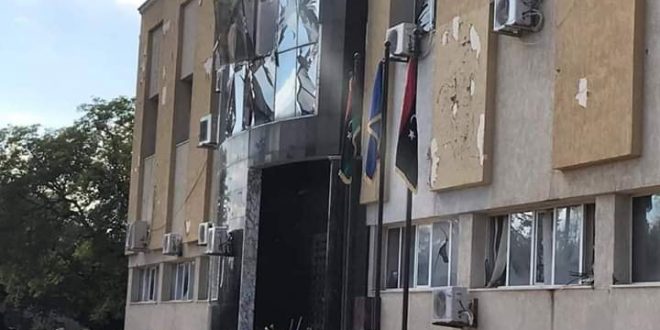 The Libyan Interior Ministry has condemned attacks on its headquarters in Tripoli by Khalifa Haftar’s warplanes, saying in a statement that the attacks were evidence of the criminality of the military forces who carried it against state institutions disregarding the threats they posed to civilians.

The Interior Ministry added in a statement on Thursday that the real aim of the attack is hindering the ministry’s security work and attempting to create chaos and terrorism in the country.

It added that it will continue to do its security work and fight crimes and terrorism to protect civilians and state institutions.

On Thursday morning, a warplane for Haftar’s forces carried out an airstrike on the headquarters of Interior Ministry on Tripoli’s Airport Road, causing injuries among civilians who live near the area that was raided.

The spokesman for the Ambulance Apparatus Osama Ali said ten civilians including women and children were injured in the airstrike that hit the Interior Ministry’s headquarters, adding that they were sent to Abu Salim Accidents Hospital for medical treatment.

Eyewitnesses said the family was injured due to the strike that targeted the Interior Ministry, saying it was a house for a military officer from the Gaddafi regime, Kahiry Khalid, and his daughter is staying in it with her family.