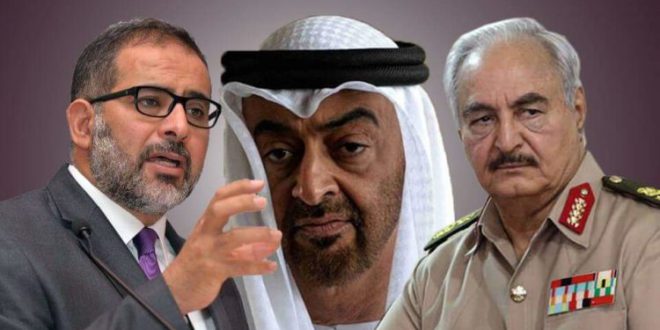 Haftar arrives in the UAE to meet with new Abu Dhabi man in Libya, Aref Al-Nayed

Khalifa Haftar, who is leading a coup against the legitimate Government of National Accord in Tripoli that is backed by the UN, has arrived in the United Arab Emirates (UAE) to meet with the Abu Dhabi top officials as well as Libyan House of Representatives Speaker Aquila Saleh and Abu Dhabi’s man in Libya, Aref Al-Nayed.

Libyan Express has learned that the meeting in Abu Dhabi will aim at reaching a common ground among Haftar, Saleh, and Al-Nayed to form a new government in eastern Libya to replace the current Interim Government of Abdullah Al-Thini.

The meeting also aims at getting the go-ahead of Haftar to accept Al-Nayed as the new Head of Government in eastern Libya so the UAE and behind it Haftar and his supporters can have a new card to play in the upcoming international conference on Libya in Berlin.

The UAE is a vital supporter for Haftar’s military operations in eastern and southern Libya in the past and in western Libya and in Tripoli currently, backing him up with drones, weapons and funding, according to undisclosed reports by the panel of experts of the UN Sanctions Committee.

International Relations and CooperationSecurity Forces
All
2019-11-14
asaeid
Previous Libya’s Interior, Foreign Ministers discuss cooperation with US officials in Washington
Next Is Libya the new Syria for Putin’s secret army?