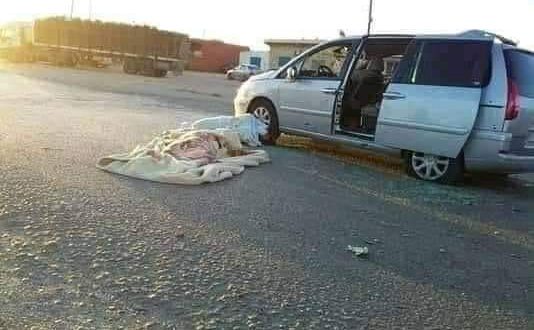 Social media activists circulated photos for three civilians’ bodies they said were murdered on the coastal road between Tripoli and Misrata after being shot by gunmen who sneaked Tuesday night into the area and started opening fire on several cars.

Volcano of Rage Operation said Khalifa Haftar’s gunmen were the perpetrators after they infiltrated into Garabulli coastal road and murdered three people from one family, who were driving to Misrata.

Pro-Haftar social media pages said a unit from Tariq bin Ziyad Brigade carried out a critical operation on the coastal road and killed “several members of the militias”.

Meanwhile, one person was killed in Al-Zohoor neighborhood in Tripoli after 10 Grad rockets fired by Haftar’s forces fell on the residential area Thursday.

Al-Zohoor neighborhood in Salah Al-Deen in southern Tripoli has been seeing large displacement by residents since last Tuesday due to repeated indiscriminate shelling by Haftar’s forces, leading to casualties and destruction of properties.