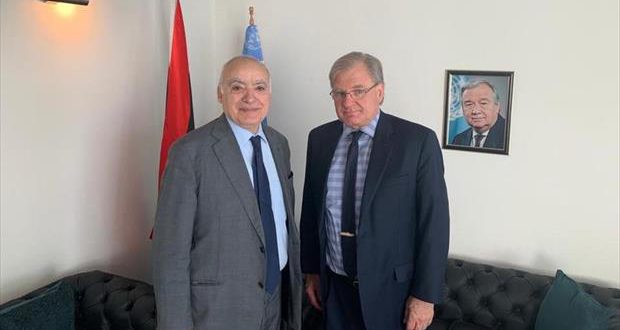 The US ambassador to Libya Richard Norland has briefed the UN envoy to Libya Ghassan Salame on the results of his latest meetings with Libyan parties.

“The meeting took place at UNSMIL’s office in Tunis and discussed the latest development in Libya. The ambassador briefed the SRSG on the outcomes of his recent meetings with Libyan parties.” UNSMIL said on Twitter on Wednesday.

The US ambassador took part in a meeting for an American delegation with Khalifa Haftar, as they told him to end the war on Tripoli and accused Russia of taking advantage of the conflict in Libya.

Norland met with the Head of the Presidential Council Fayez Al-Sarraj on Sunday and discussed efforts to end the conflict amid the Russian intervention.

The US has become more involved in efforts to end the conflict in Libya after reports of Russian mercenaries, linked to Wagner Group, supporting Haftar’s forces in the Tripoli offensive, which Russia denied despite the fact that Haftar’s forces spokesman admitted that two Russian crews are with them on the ground for technical and maintenance support.