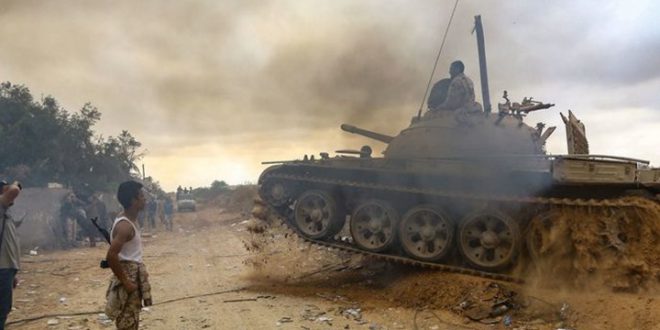 Libya’s UN-backed government has been collecting evidence of Russian mercenaries from the Wagner group fighting alongside rogue General Khalifa Haftar.

The Government of National Accord (GNA) has documented between 600 to 800 Russian fighters in Libya and is collecting their names in a list to present to the Russian government, according to Khaled al-Meshri, the head of the Tripoli-based government’s Supreme Council of State.

“We are going to visit Russia after we collect all evidence and present to the authorities and see what they say,” al-Meshri told The Associated Press last week. He did not say when that visit would take place.

US and Libya officials have accused Russia of deploying fighters from the mercenary group in key battleground areas in Libya over in the past months.

Moscow has repeatedly denied playing any role in Libya’s fighting.

Al-Meshri maintains his administration has strong evidence that there are Russians fighters on the ground.

He says that government forces have found cell phones, intercepted communications and seized personal belongings left behind in the chaos of battle.

He said flight data show dates and names of Russians moving from Syria to Egypt and then the Jordanian capital of Amman before flying to the eastern Libyan city of Benghazi, Haftar’s seat of power. He didn’t elaborate or present any of these documents or items to the AP.

Wagner Group is believed to have sent mercenaries to multiple conflicts, including Syria, Ukraine and elsewhere, raising accusations that Moscow is using it to spread its influence.

The firm is a military contractor run by Yevgeny Prigozhin, a businessman with close ties to the Kremlin. Russian officials have refused in the past to comment on the firm’s activities.

Haftar is backed by the UAE and Egypt, as well as France and Russia, while the Tripoli-based government receives aid from Turkey, Qatar and Italy.

A senior official from the US State Department said last week that it is working with European partners to impose sanctions on the Russian military contractor responsible for sending fighters to Tripoli.

“The way that this organization of Russians in particular has operated before raises the spectre of large-scale casualties in civilian populations,” Assistant Secretary of State for Near East Affairs David Schenker said.

Haftar’s self-styled Libyan National Army – made up of former army units, ultraconservative Salafists, and tribesmen – launched its offensive on Tripoli in April after seizing much of eastern Libya from Islamic militants and other rivals in recent years

Libya was plunged into chaos when a NATO-backed uprising toppled long-time dictator Muammar Gadhafi in 2011. The country is now split between a government in the east, allied with Haftar, and the GNA in Tripoli in the west.

Both sides are bolstered by militias. Fighting has stalled in recent weeks, with both sides dug in and shelling one another along Tripoli’s southern reaches.