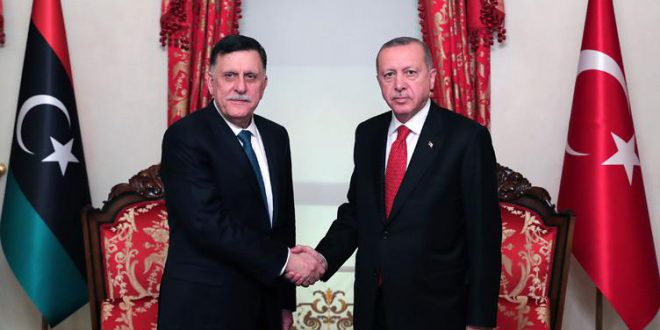 On November 27 during a meeting between Recep Tayyip Erdogan and Fayez al-Sarraj in Istanbul, Turkey and the internationally recognised Libyan Government of National Accord (GNA) signed a memorandum of understanding on the ‘delimitation of maritime jurisdiction areas’ in the Mediterranean Sea, along with a memorandum of understanding on security and military cooperation.
The Turkish parliament ratified the maritime boundary delimitation agreement with Libya on December 5 and it went into effect after publishing it in the Official Gazette on December 7.A copy of the agreement was also sent to the UN to be registered.
Greece, Egypt, and Cyprus strongly criticised the agreement and considered it illegal. Israel joined the group by expressing its full support to Greece. Athens in particular, claimed that the agreement is geographically illogical as it disregards its Crete Island. Furious about the Turkish-Libyan deal, it expelled the Libyan ambassador.Egypt, however, resorted to a different pretext and claimed that the agreement cannot be officially recognised in light of the Skhirat Agreement’s Article 8, which stipulates that “the Libyan government or the cabinet, not the prime minister, has the authority to sign international agreements”.

Both Ankara and Tripoli defended the bilateral agreements executed by the two sovereign states. Responding to the claims made by Greece and Egypt, Hami Aksoy, the Spokesperson of Turkey’s Ministry of Foreign Affairs asserted that the agreement is in accordance with international law.

In its turn, Head of Libya’s State Council described the Greek step as “diplomatic thuggery”, adding that if Athens objects to the agreement, it has the right to resort to international law, affirming that Greece was actually procrastinating with Libya in this regard since 2004.

Why it is important?

According to Turkish officials, Ankara has been in talks with Libyan authorities regarding maritime boundaries since 2009. Therefore, this step is not directed towards any regional player and is not a response to any recent developments in the eastern Mediterranean.

Yet, this doesn’t mean that the Memorandums of Understanding (MOU) do not have implications on the geopolitical configuration of the region and on the alignments that have been taking place in the eastern Mediterranean in the last few years.

The memorandum establishes 18.6 nautical miles of a continental shelf and Exclusive Economic Zone boundary line between Turkey and Libya.

It is important for both Turkey and Libya because it protects their maritime rights in the Mediterranean Sea amid the consecutive unilateral steps taken by Greece and the Greek part of the Cyprus (Republic of Cyprus) to delimitate their maritime zones with other states, without taking into consideration the rights of the third parties involved (Turkey and Libya in this case).

Greek Cyprus for example concluded unilateral agreements with Egypt, Lebanon, and Israel without taking into consideration the rights of both Turkey and the Turkish Cypriots who have rights in the island.

Greece also concluded similar agreements, and have been working hard to isolate Turkey through alliances with countries that share the same goal.

The deal angers Greece because it qualifies Libya to regain around 39,000 km2 of its EEZ area that was illegally claimed by Athens. Greece wanted to utilise the hard circumstances of Libya in order to seize an area that equals almost four times the size of a country like Lebanon.

Furthermore, the agreement will prevent any fait accompli in the eastern Mediterranean and will force other states to negotiate in order to reach an acceptable solution and a fair sharing of the region’s resources, especially in areas where there are conflicting claims for several states.

Turkey has always been open to such approach. It repeatedly invited all parties to negotiations for a consensus based on equity and remains ready for negotiations. However, instead of engaging in negotiations in response to Turkey’s international law and equity-based approach, Greece and Greek Cyprus only preferred to take unilateral steps and try to shift the blame on Turkey.

In this sense, the agreement also undermines the collective effort by Greece, Greek Cyprus, Israel and Egypt to isolate Turkey in the eastern Mediterranean and deny Ankara the right to benefit from its hydrocarbon resources in that area.

These countries have already set a regional platform (Eastern Mediterranean Gas Forum) without inviting Turkey, to consolidate their claims.

The MoU between Turkey and Libya makes it hard for these states to establish a pipeline and export gas from the eastern Mediterranean to Europe without reaching a deal with Turkey.

The narrative of Greece vs Turkey

Greece believes that United Nations Convention on the Law of the Sea (UNCLOS) gives it the right to entitle every single rock that belongs to it in the Mediterranean a maritime jurisdiction area.

According to this approach for example, Kastellorizo, a small island immediately across the Turkish mainland is supposed to generate a maritime jurisdiction area of four thousand times larger than its own surface and deny Ankara vast rights in the area.

From Turkey’s perspective, this reflects Greece’s expansive agenda and maximalist behaviour rather than being an international law, because the international law doesn’t fully guarantee such things, especially if there are other involved factors to be considered.

For several reasons, not every single country in the world is a party to the 1982 (UNCLOS). Among those that lay in the eastern Mediterranean, Turkey, Syria, and Israel are not members.

For Ankara, the convention has three problematic articles and does not adequately secure the right of coastal states in enclosed or semi‐enclosed seas where special circumstances prevail.

Thus, although Turkey says the MoU with Libya is fully compatible with international law, those states that agree with the convention can’t force their approach on the states that don’t agree with it anyway.

In this sense, Turkey argues that the islands which lie on the opposite side of the median line between two mainlands cannot create maritime jurisdiction areas and have nothing other than territorial waters.

It also highlights the importance of comparative coastal lengths and the principle of equitable delimitation.

Accordingly, with respect to the Turkish-Libyan agreement, the Greek islands, should not enjoy a continental shelf and exclusive economic zone. This approach angers Greece as it prevents it from continuing its expansive efforts to extend its exclusive economic zone towards Turkish continental shelf based on other cases such as Kastellorizo, Rhodes and Crete Islands in the eastern Mediterranean.

The fall of Sisi’s plan

As for Egypt, the agreement doesn’t harm Cairo’s interests as Egypt’s Foreign Minister acknowledged in a speech in Rome last week. On contrary, the Turkish-Libyan agreement can be used as a leverage to allow Cairo to claim back its rights from Greece and Greek Cyprus.

However, this is in itself a problem for Sisi, because the agreement uncovers the fact that the Egyptian regime has agreed to relinquish Egypt’s rights to Greece and Greek Cyprus to secure regional and international support for him to stay in power.

This partially also explains why Cairo used a different pretext than the Greek one to question the legitimacy of the agreements between Turkey and Libya.

In fact, while Egypt claims that the Skhirat Agreement doesn’t entitle the head of the GNA to sign such agreements with Ankara, Cairo has been in active violation of the mentioned agreement by recognising, hosting, and supporting – politically and militarily – the Libyan warlord General Khalifa Haftar who is waging a war against the capital Tripoli and the internationally recognised government of GNA.

In this sense, the military and security agreement that Turkey signed with the GNA is of more concern to Cairo in terms of urgency because it will make it impossible for Haftar to win the war depending on military support from countries such as Egypt, the UAE, France, and others.

The whole point from Turkey’s perspective is that the GNA was denied the right to defend itself while the illegal militias and groups led by Haftar have been given full militarily support by regional and international powers.

In order to bring the balance back to the equation in a way that favours the political resolution and restores the stability to Libya, Ankara decided to support the GNA.

Accordingly, this MoU promotes the status of the GNA on the ground, and provides Ankara with the necessary legal tool to do so, which in its turn, runs against Cairo’s own plans for Tripoli.