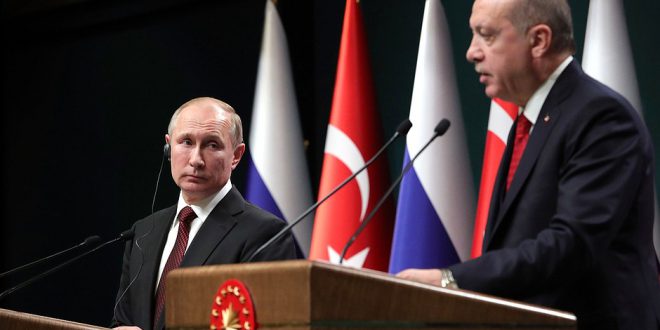 Turkey and Russia vie for influence in Libya with troop deployments

The Turkish government’s possible deployment of troops to Libya may tip the balance of power in the country and could put Turkey in Russia’s crosshairs, regional experts and sources told Middle East Eye.

Yet, they say, it is more likely that Turkish and Russian troops in the war-torn country could see Ankara and Moscow become the brokers of a new settlement process.

Turkish President Recep Tayyip Erdogan announced this week that his country would consider sending troops to Libya if its UN-recognised Government of National Accord (GNA) makes a request.

“This isn’t covered by the UN arms embargo. They can invite us,” Erdogan said in televised remarks on Monday.

Turkey and the GNA’s Prime Minister Fayez al-Sarraj signed a memorandum of understanding earlier this month that upgraded the existing military cooperation deals between the two allies.

Two senior Turkish officials, who spoke on condition of anonymity due to government protocol, told Middle East Eye that the deals on military training and technical support legally allow the Turkish government to deploy troops to Libya.

“Of course a decision by the parliament is needed. But that’s easy,” Murat Aslan, an academic at Hasan Kalyoncu University with a military background, told MEE.

Even though Erdogan seems to be waiting for an invitation from Libya before taking such a step, he has already made up his mind on the issue, a well-placed Turkish source told MEE.

“He is ready to send troops. He isn’t using this issue as leverage. He knows that a request would be forthcoming,” the source said.

According to Ibrahim Kalin, one of Erodgan’s top aides, the GNA has yet to call on Ankara for troops. But requests have nonetheless been made through less official channels, such as Libyan Grand Mufti Sadiq al-Ghariani, who urged the GNA to ask for Turkish assistance.

While Turkey is throwing its weight behind the GNA, regional powers such as Egypt, Saudi Arabia and the UAE have been backing its rival, the self-styled Libyan National Army (LNA) –  led by General Khalifa Haftar – in a bloody civil war.

Meanwhile, Egypt and its allies consider Sarraj’s government as an extension of the Muslim Brotherhood, which has been outlawed by Egyptian President Abdel Fattah el-Sisi.

The stakes are high: Libya produces nearly one million barrels of crude oil per day and is a major departure route for refugees and migrants seeking to reach Europe.

“Turkey is able to tip the scales even with a fairly limited deployment,” Tarek Megerisi, a specialist on Libya at the European Council on Foreign Relations, told MEE.

“It’s also important to note that Turkey’s re-involvement will inevitably lead to further escalations from the Haftar-supporting states.”

Earlier this year, GNA forces were able to show some resistance against Haftar’s forces, following Turkish military aid that included armoured vehicles and armed drones. Yet a new player changed the equilibrium in the field: Russia.

Multiple reports have indicated that Russian private security organisation Wagner Group has been involved in the war since October. Wagner has reportedly brought hundreds of soldiers to Libya, including skilled snipers, and much needed military-technical expertise to break the stalemate near Tripoli.

Since the arrival of the Russians, Haftar’s troops have made some progress towards the capital, taking steps to place a siege on the city.

“This conflict maintains a significant potential to spiral out of all control as a result of tit-for-tat escalations,” Megerisi said.

Erdogan, on Tuesday, confirmed Wagner’s presence in Libya in televised remarks and used it as a way to legitimise possible Turkish military involvement in the country. “Like they send the Wagner Group, we could send our own staff,” he said.

Russia and Wagner are no stranger to conflicts in the region, and heavily back President Bashar al-Assad’s government in Syria.

However, Moscow’s involvement in Libya is more sophisticated and nuanced compared to its partnership with Assad’s forces in Syria.

“For example, even though the Russian militarily backs Haftar’s forces, they have maintained their ties with Tripoli,” Aslan said.

Russia currently denies its involvement in the country and tells regional experts that the Wagner Group is there for only advisory and assistance roles, for not active combat. Yet the US military said it believes Russian air defences last month shot down an American drone near Tripoli.

Yury Barmin, Middle East and North Africa Director at the Moscow Policy Group, told MEE that Russia is open to cooperating with the GNA.

“Russia’s relationship with Haftar is very transactional,” he said, adding that the chances of direct clashes between Turkish and Russian troops are slim.

Instead, Barmin said, Moscow and Ankara are likely to find points that suit both their agendas and may seek to position themselves as the drivers of a settlement process there, as with Syria and the Astana process they started to deescalate the conflict there.

Erdogan himself declared this week that he doesn’t want “another Syria” dossier with Putin.

“I believe Russia will review the current thesis on Haftar because there isn’t any legal aspect of it. Haftar is illegal and any support made to him is maintained within this illegality,” he said.

The extent of any Turkish troop deployment would also be key.

The speculation in Ankara is that the very presence of Turkish troops in Libya could provide the GNA with a sense of immunity because Haftar’s forces wouldn’t dare fire upon them, despite his repeated threats.

Meanwhile, international efforts to bring peace are struggling to make headway, leaving the door open for new players to attempt a settlement.

“I wouldn’t be surprised to see an Astana type of process for Libya in the new year,” Megerisi said.