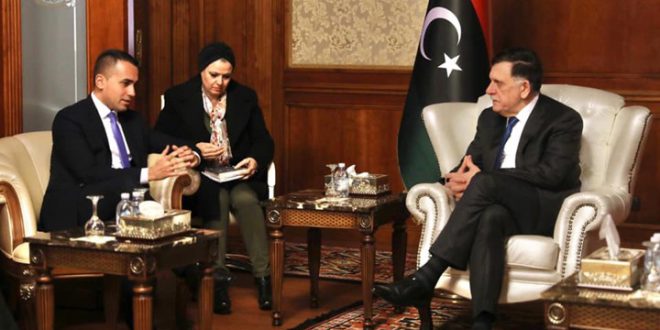 The Italian Foreign Minister Luigi di Maio has reiterated support for the Libyan Presidential Council, reaffirming that there can be no military solution to the Libyan crisis and that Italy backs up UN-brokered efforts for political solutions.

These remarks came in a meeting for di Maio with the Head of Presidential Council Fayez Al-Sarraj in Tripoli on Tuesday in the presence of Libya’s Foreign Minister Mohammed Sayala and ambassador to European Union Hafid Gadour.

Di Maio said Italy hopes that Berlin conference on Libya will establish some unity toward the ongoing conflict among all stakeholders.

Meanwhile, Al-Sarraj hailed Italy’s support for his government and added that his government is following closely the preparations of Berlin conference, saying all countries linked with the crisis in Libya should be invited to the conference.

Di Maio arrived in Tripoli on Tuesday morning and met with Presidential Council’s government officials before he left to meet Khalifa Haftar in Rajma, outside Benghazi, and after that to Gebba town to meet House of Representatives Speaker Aqila Saleh.

International Relations and Cooperation
All
2019-12-17
asaeid
Previous ‘Diplomatic adolescence’: Libya trades barbs with Egypt after sovereignty remarks
Next Libya’s War of the Many