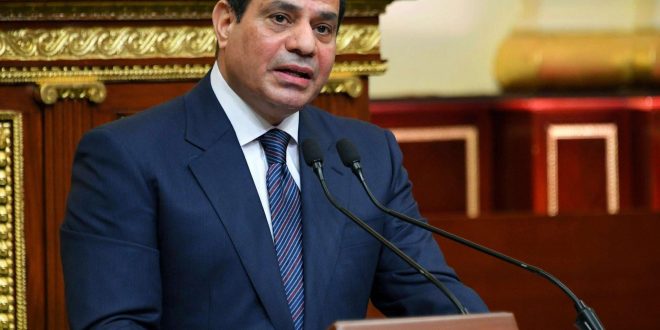 Egyptian President Abdel Fattah al-Sisi has vowed to continue support for rogue Libyan General Khalifa Haftar, who has been waging a war against the internationally-recognised government of Prime Minister Fayez Sarraj.

At a youth conference in the city of Sharm Al-Sheikh in Sinai said that “Egypt’s position supporting [Haftar’s self-styled] Libyan National Army is solid and can’t be replaced”.

The Egyptian dictator said that Prime Minister Fayez Sarraj’s government was being held hostage by “terrorist militias”, in a reference to the pro-government militias which have defended the Libyan capital Tripoli against an ongoing assault by Haftar’s forces which began in April 2019.

Sisi warned against attempts “to control” neighbouring Libya, as tensions grow over Turkey’s expanding ties with the Tripoli-based government.

His remarks came after Turkish President Recep Tayyip Erdogan expressed readiness to send troops to Libya if requested by the country’s Government of National Accord (GNA).

Erdogan, who supports the GNA, met with its head Fayez Al-Sarraj in Istanbul on Sunday, after the two countries signed maritime and military deals last month.

Egypt’s foreign ministry has lambasted the agreements as “illegitimate”.

On Tuesday, state-run newspaper Al-Ahram quoted Sisi as telling journalists the previous evening: “We will not allow anyone to control Libya … it is a matter of Egyptian national security.”

Libya has been split between rival administrations vying for power in the east and the west.

On Thursday, Haftar announced a “decisive battle” to wrest the capital from the GNA.

GNA Interior Minister Fathi Bashagha responded saying his government was ready “to push back any mad attempt by the Haftar putsch leader”.

Cairo’s relations with Ankara have been fraught with tensions since Sisi led the 2013 military ouster of Egypt’s first democratically-elected President Mohamed Morsi, who was supported by Turkey.

On Sunday, Libya’s embassy in Egypt announced on its Facebook page that it was closing indefinitely citing security concerns.

“The embassy of Libya in Cairo… suspended its work due to security reasons starting Sunday and until further notice,” a statement said without giving further details.

It however flatly denied in a separate statement reports suggesting that some embassy staff had broken ranks with the UN-recognised Government of National Accord based in Tripoli.

The GNA’s foreign ministry confirmed that the embassy had been closed indefinitely.

It said the work at the mission was suspended in order to protect staff after a series of recent “violations” targeting the embassy, including attempts by some to “blackmail” employees in order to obtain money.

The foreign ministry gave no further details but said “work is underway with the Egyptian authorities to put an end to these violations and secure the embassy as required”.

The embassy would resume its operations when it is secured, it added.

The Libyan embassy in neighbouring Egypt has long been at the centre of a power struggle between the country’s rival administrations in the east and the west.