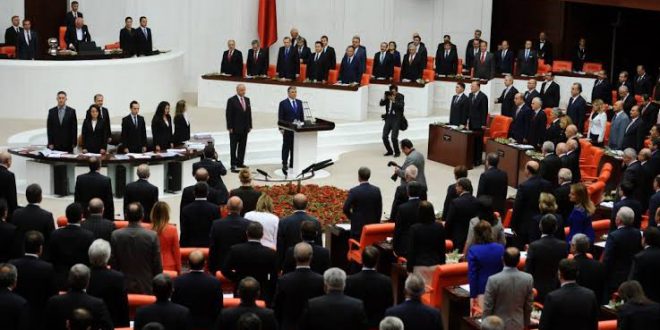 Turkey may need to draft a bill to allow for troop deployment to Libya and its parliament is working on the issue, Presidential spokesman Ibrahim Kalin said on Tuesday, after Ankara signed a military cooperation agreement with Tripoli last month.

“There might be a need for an authorization in line with the developments over there. The parliament is conducting work on this issue,” Kalin told a news conference in Ankara.

“We will continue to support the internationally recognized Libyan government. This support may be in terms of military training, or other areas, such as political support,” Kalin said.

Turkey backs Libya’s internationally recognized government and has said it could deploy troops there if it receives such a request. Libya’s Tripoli-based government has been fighting off a months-long offensive by Khalifa Haftar’s forces based in the east of the country.

Haftar’s forces have received support from Russia, Egypt, Jordan and the United Arab Emirates as well as France.

Speaking in Ankara after a cabinet meeting, Kalin added that Turkey would continue to provide the necessary support to Fayez al-Serraj’s Tripoli-based government.

Ankara says Fayez al-Serraj’s Government of National Accord (GNA) has not yet asked Turkey to deploy troops to Libya. However, President Tayyip Erdogan said on Sunday that Turkey would increase its military support to Libya if necessary and would evaluate ground, air and marine options.

Last week, Russia said it was very concerned about Turkey’s potential troop deployment in Libya, adding that the military accord between the two countries raised questions. A Turkish delegation traveled to Moscow on Monday to discuss developments in Libya and Syria.

International Relations and CooperationSecurity Situation
All
2019-12-24
asaeid
Previous The Guardian: New wave of Sudanese mercenaries arrive on Tripoli frontlines to fight for Haftar
Next US ready to support negotiations between Libya parties