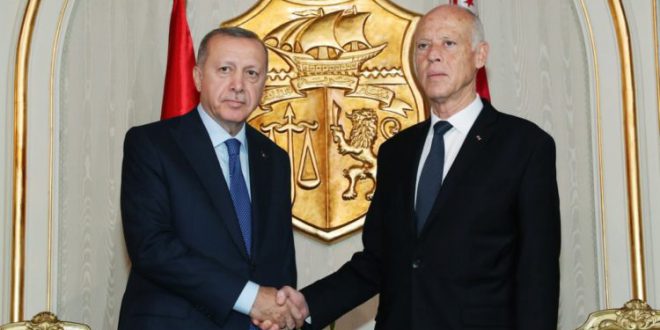 Turkish President Recep Tayyip Erdogan made an unannounced trip to Tunisia on Wednesday as regional tensions continued to escalate over the crisis in Libya.

Speaking at a joint news conference with his Tunisian counterpart, Kais Saied, Erdogan told reporters they discussed ways of establishing a ceasefire and bringing warring Libyan factions back to the negotiating table.

“We discussed the possible steps we can take … with the aim of establishing [a] ceasefire in Libya as soon as possible, and returning to a political process,” he said.

Erdogan also reaffirmed Ankara’s willingness to send troops to Libya if it received such a request from the UN-backed administration in Tripoli.

“Until today, we have never been unwanted guests anywhere, but if a call is made then we will surely evaluate it and take steps,” he said.

Erdogan has previously said that Ankara could deploy troops to Libya in support of the Tripoli-based Government of National Accord (GNA), which has been fighting off a months-long offensive by Khalifa Haftar’s forces from the east of the country.

Haftar, a one-time CIA asset who served under former leader Muammar Gaddafi, launched a military operation in early April to seize control of the capital Tripoli, but so far his forces have been unable to reach the city.

Haftar’s forces are backed by the United Arab Emirates (UAE) and Egypt, and are also supported by fighters and mercenaries from Sudan and Russia.

On Tuesday, presidential spokesman Ibrahim Kalin said Turkey might need to draft a bill to send troops into Libya, adding that the parliament was currently working on one.

Ankara’s possible deployment to Libya has alarmed Russia, which said it was concerned by such a prospect.

Last week, Erdogan said Turkey would not remain silent in the face of “mercenaries” such as the Wagner group.

The Wagner Group is a shadowy Kremlin-backed private military contractor that has also been involved in the Syrian civil war, where Moscow backs President Bashar al-Assad against rebel forces.

The military contractor is also believed to be active in Sudan and the Central African Republic, where it reportedly serves as President Faustin-Archange Touadera’s personal security detail.

Turkey’s parliament also agreed to a memorandum of understanding with Libya to delimit maritime zones in the Eastern Mediterranean, in an attempt to block Greek and Cypriot energy drilling activities in the area.

Turkey’s move prompted Greece to expel the Libyan ambassador from the country for failing to disclose details of the agreement.

Athens says the deal violates international law, while Ankara says it aims to protect its rights in the region and is in full compliance with maritime laws.