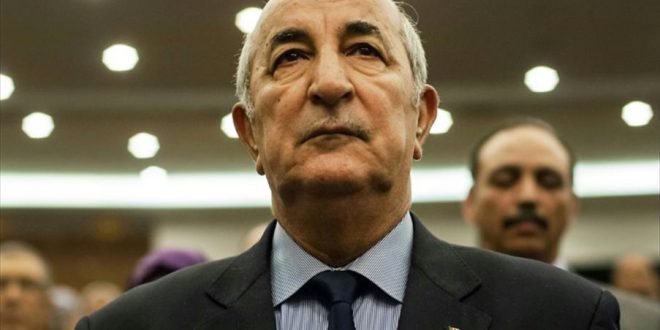 Algeria’s president has declared Libya’s capital a “red line,” and warned “no one to cross it,” after forces loyal to military commander Khalifa Haftar reportedly shelled a military academy on the weekend, killing 30 people.

During a meeting on Monday with the head of the Tripoli-based Government of National Accord (GNA), President Abdelmajid Tebboune said: “Algeria regards Tripoli as a red line and expects no one to cross it.”

Tebboune also condemned the weekend airstrike on a military school in Tripoli, which the GNA said was carried out by a Chinese-made Wing Loong II drone belonging to the United Arab Emirates (UAE).

“The attack on the military school in Tripoli, which caused the deaths of 30 students, is considered a war crime,” Tebboune said.

At least 30 people were killed and 33 injured in the air strike on Saturday, which mainly targeted students.

The Algerian president also urged the international community, particularly the United Nations Security Council (UNSC), to fulfil their responsibilities for achieving peace and stability in the war-ravaged country.

The GNA has been fending off a months-long offensive by Haftar’s forces, which are backed by the UAE and Egypt, and are also supported by fighters and mercenaries from Sudan and Russia.

The GNA recently requested military assistance from the Turkish government, with Ankara sending military advisers and experts to Libya to help shore up the beleaguered government.

Last month, the GNA warned Libya’s neighbours of severe repercussions if Haftar was to take Tripoli.

“If Tripoli falls, Tunis and Algiers will fall in turn. This is an attempt to sow chaos in the region and exercise control over North Africa,” Fathi Bashagha, the GNA’s interior minister, said.

In response to Turkey’s move, the European Union’s top policy chief criticised Ankara by name on Tuesday, telling reporters: “We asked for a ceasefire and we asked also to stop escalation and to external interference, which has been increasing in the past days.

“It is obvious that this makes a reference to the Turkish decision to intervene with their troops in Libya which is something that we reject and which increases our worries about the situation in Libya.”

Haftar, a former CIA asset, launched a military operation on Tripoli in early April after sweeping through much of Libya’s south and capturing most of the country’s oil installations.

In recent weeks there has been an escalation in fighting, shelling and air strikes in and around Tripoli, and the strategic coastal city of Sirte.

On Tuesday, a militia allied with the GNA conceded that it withdrew from Sirte to avoid bloodshed, after their eastern rivals rapidly entered and took control.

A spokesman with the Sirte Protection Force also accused Haftar’s forces of burning homes and looting after entering the city on Monday. Haftar’s forces denied any violations.

Libya, a large oil producer, has been plagued by crisis since a NATO-backed uprising toppled longtime leader Muammar Gaddafi in 2011.

The country is currently split between two rival administrations: the GNA, led by Prime Minister Fayez al-Sarraj, and the House of Representatives based in the eastern city of Tobruk, which is allied to Haftar.