Home / Normal / Can Russia and Turkey Bring Peace to Libya? 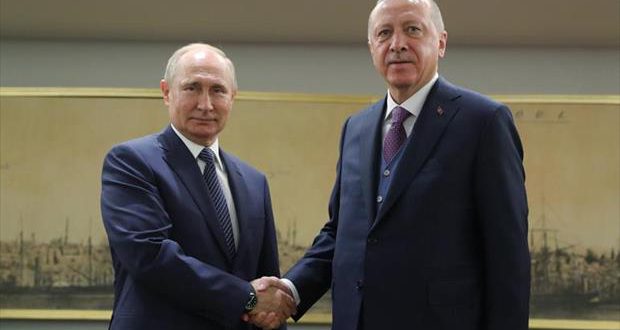 Can Russia and Turkey Bring Peace to Libya?

Having declared themselves mediators in the civil war in Libya, Russia and Turkey will try to replicate the model of cooperation and mutual accommodation they developed in Syria.

The official opening of the TurkStream gas pipeline on January 8 gave the leaders of Russia and Turkey an opportunity to discuss recent events in the Middle East. The main topic of talks between Vladimir Putin and Recep Tayyip Erdogan was apparently not Iran, nor Syria, but Libya, to which the longest section of the post-talks communique was devoted.

The two presidents were keen to reach a compromise on Libya ahead of other interested parties, especially those from the European Union. Citing UN resolutions, Turkey and Russia agreed to “call on all parties in Libya to stop hostilities as of 00.00 hours on 12 January.”

The Russian-Turkish initiative swiftly gained the support of one side in the Libyan conflict: the UN-recognized Government of National Accord headed by Fayez al-Sarraj in the capital Tripoli, backed by Turkey. General Khalifa Haftar, who is backed by Russia, initially rejected the ceasefire, but later agreed to it.

It was important for Russia and Turkey to come to an agreement on Libya before German Chancellor Angela Merkel’s visit to Moscow on January 11, during which the topic of Libya was also bound to be discussed in detail. Berlin, as the fulcrum of the European Union, is set to host a conference aimed at ending the conflict, which has a major impact on the economic situation—and, via migration, the political situation—in many EU states. Currently, however, the EU does not have a united position on Libya.

For centuries foreigners have fought over Libya’s resources. Russia is interested both in Libya’s energy resources (its oil reserves are mainly located in the territory controlled by Haftar) and in the political gains it would win from consolidating its position in the country. If things go exceptionally well for Moscow, it could try to reinstate at least some of the multi-billion-dollar contracts it had signed with the country’s late leader, Muammar Gaddafi.

With its ports and extensive Mediterranean coastline, Libya also offers serious logistical opportunities which can further Russia’s newly rediscovered ambition to broaden its presence in Africa. Turkey is also very active in Libya, but Moscow and Ankara have learned how to cooperate in Syria.

For Ankara, which has been developing its cooperation with African countries for many years now, Libya offers the same economic prizes as for Russia: oil, ports, and political influence, both in the Mediterranean and in the part of Africa where the current Egyptian leadership so despised by Erdogan has a strong foothold.

Turkey also has ideological reasons for intervening in Libya. Al-Sarraj has been linked to the Muslim Brotherhood organization supported by the Turkish leadership. Turkish adepts of a greater Ottoman Empire recall that Libya was part of that empire.

Under Erdogan, Turkey has drastically revised its strategy in the Middle East. Following the example of the United States in Iraq and Russia in Syria, it has decided that it’s better to shoot first and talk later. Russia entered Syria at the request of President Bashar al-Assad, and has stayed there for the long term. Now Erdogan has agreed to al-Sarraj’s request for military assistance.

According to media reports, military advisers from Turkey—possible private Turkish military contractors—have already arrived in Libya. Pro-Turkish Syrian fighters are expected to join them. Erdogan does not, however, want to send regular troops to Africa.

Possibly, Erdogan was persuaded to send assistance by reports (so far unconfirmed) that mercenaries from Russia’s Wagner private military company are fighting in Libya. Erdogan himself has publicly claimed that there are about 2,000 Wagner fighters in the country.

Yet Turkey is confident it will not come into conflict with Russia in Libya. That is not in the interests of either side now that they have declared themselves mediators in the civil war. It’s far more advantageous for them to try to replicate in Libya the cooperation model they developed in Syria. That comprises a demarcation of areas of influence, and an agreement to work toward a peaceful resolution of the conflict, taking into account the interests and wishes of each partner.

Of course, the fact that Turkey and Russia support different Libyan actors will be a major obstacle. The Turkish leadership had no option but to choose the side of al-Sarraj, due to its long-held ties with the Muslim Brotherhood organization. Russia, on the other hand, could not fail to back the secularist Haftar, who studied in the Soviet Union and speaks Russian.

For Russia, close cooperation with Turkey is something of a guarantee that the United States will not get overly involved in the conflict. It could also ease trade-offs with Erdogan over unfinished business in Syria.

Both countries are so dependent on one another that they have major incentives to stick to the compromises they reach. Of course, local setbacks in Libya are inevitable, such as Haftar’s initial rejection of the ceasefire. Yet Russia and Turkey have already shown in Syria that they are able to agree even when they support opposing sides in a conflict.