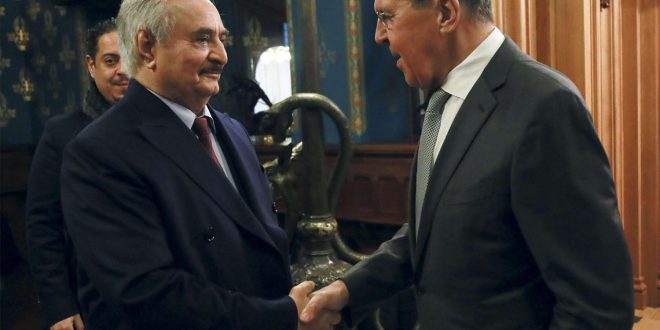 When the news broke out overnight in Ankara that Libyan rebel leader Khalifa Haftar refused to sign the ceasefire deal brokered by Turkey and Russia, Turkish officials were in disbelief.

After all, Ankara had convinced the UN-backed government’s Prime Minister Fayez al-Sarraj to sign the deal in Moscow. And Haftar was expected to do the same on Tuesday morning, putting a formal pause to the civil war that has dragged on for the past four years.

Instead, the eastern military commander left without a statement or a signature.

The move by Haftar will be seen as a blow to Moscow, as he made a media spectacle of the summit which was also a showcase of deepening Russian influence in the region.

Turkish officials told Middle East Eye that Haftar’s decision put his Russian patrons in a peculiar position. “They are in a tight spot,” a senior official told MEE.

Another senior Turkish official told journalists that the ball was now in Moscow’s court since Turkey had already delivered what it promised, namely Sarraj.

Pro-Haftar Al Arabiya reported that the military commander had refused to ink the deal because it wouldn’t expel Turkish forces from Libya. Earlier this month, Ankara deployed troops to Tripoli to shield the city from further attacks from Haftar’s Libyan National Army (LNA) forces.

Turkish President Recep Tayyip Erdogan was clear in his response to the rebel leader, speaking to AKP party politicians on Tuesday.

“If attacks on the legitimate government and our brethren continue, we will never refrain from teaching a lesson to Haftar,” he said, emphasising the point that Turkey had done its part and the rest was up to Russian President Vladimir Putin and his team.

Why did Haftar walk?

Turkish officials believe other players, such as the UAE, Egypt and even France might have played a role in convincing Haftar not to sign the deal. “All of them could have an impact on him,” the first senior Turkish official said.

Open-source flight data shared by trackers shows that two military jets were on their way from Abu Dhabi toward Libya on Tuesday, although their transponders were eventually turned off over Egypt.

Their final destination is unknown, but Tarek Mergerisi, a policy fellow at the European Council on Foreign Relations, raised questions about whether they ended up in Libya to reward Haftar.

Turkish state-run news agency Anadolu, quoting Libyan government sources, reported that additional armoured vehicles and cannons belonging to the UAE were brought to Haftar’s military headquarters in Tarhuna, about 60 miles outside of Tripoli, this week.

Several experts told MEE that they believe Haftar’s snub to the Russians could only be explained by his expectations of support from the UAE.

“Haftar realises that he is guaranteed support by the UAE, which is personally and ideologically invested in him and the project he represents,” Emadeddin Badi, a policy fellow specialising in Libya at the European University Institute, told MEE.

Russia’s Defence Ministry announced through the Interfax news agency on Tuesday that Haftar was still approaching the ceasefire deal positively and has asked for two additional days to consult with his local partners.

Meanwhile, the ministry said Haftar’s forces would continue to uphold the verbal truce reached by the parties last weekend.

Some analysts say Moscow is trying to buy time to sort out the problem.

“If Russians withdraw the Wagner Group [a Russian mercenary group] from the frontline, Haftar cannot continue with its offensive in Tripoli,” Emrah Kekilli, a Libya expert at the Ankara-based think tank SETA, told MEE.

“It seems to me that Haftar took this decision with the backing of the UAE and France. They probably sought permission from the US which was bothered by the increasing Russian control of the situation.”

Badi believes Russia will reassess its options following the embarrassment they faced in the Moscow meeting that Putin and Erdogan personally set up.

“Quite honestly, I think [Haftar] is weaponising the lull in order to consolidate supplies for another offensive,” he said.

After Haftar left Moscow, the LNA forces declared their readiness to root out “terrorists” from Tripoli. A source with the UN-backed government in Tripoli reportedlysaid rebel forces were gathering in the south of the city.

Although the Turkish foreign minister said that Haftar’s actions could undermine the Berlin diplomatic process to end the crisis, Erdogan said that he would still travel for the summit in Germany on Sunday along with leaders from France, the UK, Russia, Italy, Algeria and the UAE.

Mustafa Ozbey, a retired Turkish admiral, however, said on Twitter that he believes the Moscow meeting was still successful because it brought Turkey and Russia closer to each other.

“Haftar is isolated since Germany and Italy actively engaged with the situation through Turkey and Russia. And Egypt declared its support for the ceasefire,” he said.

“The parties [such as Greece, Cyprus and Egypt] who opposed Turkey’s maritime delimitation deal with Libya also lost their influence.”

Turkish officials previously told MEE that Ankara was determined to preserve its maritime and security deals with Libya, which are essential to defend Turkish interests in the Eastern Mediterranean against Greek exclusive economic zone claims.