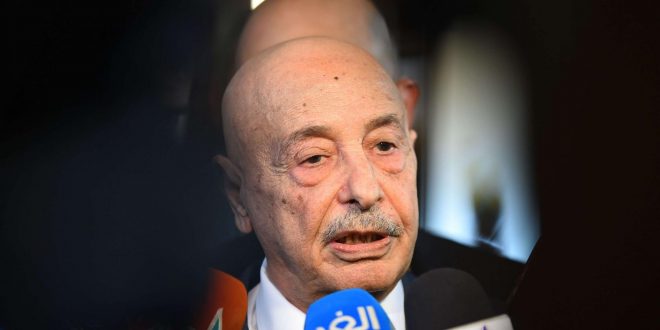 Head of Libyan Parliament in Tobruk Says Ceasefire Over, War Will Continue – Reports

Libyan National Army (LNA) Commander Khalifa Haftar and the head of the rival Government of National Accord (GNA), Fayez Sarraj, took part in peace talks mediated by Russia and Turkey in Moscow. At the end of the talks, the GNA delegation signed a ceasefire agreement, while the LNA commander left the Russian capital without inking the deal.

According to multiple reports, Akile Salih, who is the president of the House of Representatives and is allied with Field Marshal Khalifa Haftar, announced that the ceasefire – announced by rival forces on Sunday – had ended and that war would continue.

After the Moscow talks mediated by Russia and Turkey failed to yield an official ceasefire agreement, GNA-LNA skirmishes near Tripoli have reportedly resumed. The east-based Libyan army reported that fighting was underway in the Libyan capital’s southern suburbs. The LNA reaffirmed its readiness to continue its offensive to ‘liberate’ Tripoli.

Libya is being torn apart by the two rival administrations, beginning in 2011 when long-time leader Muammar Gaddafi was overthrown and killed, with the LNA controlling the east and the Tripoli-based GNA occupying in the country’s west.

The situation in Libya escalated over the past several weeks as LNA commander Haftar ordered his troops to advance on the Libyan capital of Tripoli, controlled by the UN-recognized GNA. The city has experienced being a battleground of similar attacks in April when hundreds of people were killed and thousands injured.A special conference in Berlin this Sunday will seek to restart the political process in Libya, under UN auspices. The GNA has confirmed it will attend. A response from Haftar and the LNA is pending.