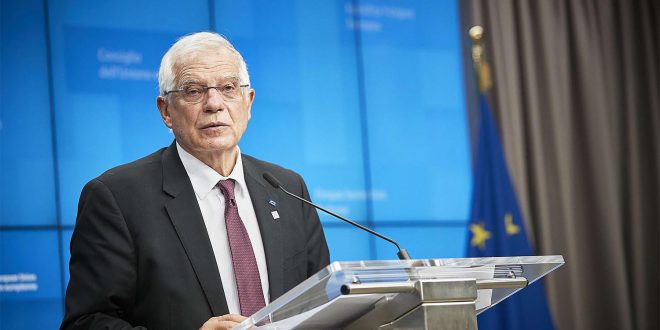 European foreign ministers met Monday to discuss reviving a naval mission in the Mediterranean in order to enforce an arms embargo against Libya’s warring parties.

The EU meeting came a day after Germany hosted a summit to push for a ceasefire in the civil war, boosting calls for Operation Sophia to be relaunched.

Before the meeting there had also been talk of setting up a European military mission to monitor any ceasefire, but ministers arriving in Brussels were cautious on this.

“It’s clear that the arms embargo requires high level control and if you want to keep the ceasefire alive someone has to monitor it,” EU chief diplomat Josep Borrell said.

Fayez al-Sarraj, who leads the UN-recognised government in Tripoli, and his strongman opponent Khalifa Haftar refused to meet face-to-face at the Berlin summit.

There has been no political agreement between the sides, but external actors like Turkey, Russia, Egypt and France have agreed to stop interfering in the Libyan conflict.

Until there is a ceasefire to monitor, talk of an outside force will recede, but in the meantime the EU ministers will seek a way to revive the Rome-based Sophia mission.

He told reporters that UN Libya envoy Gassam Salame would invite the sides to talks and foreign ministers of the countries involved could meet next month.

“And we will deal with integrating the European Union into this process. The issue of the arms embargo will be raised in the United Nations Security Council,” Maas said.

“In this respect, yesterday was only the starting signal that the civil war in Libya could be turned into a political process,” he said.

Last week, Borrell had raised the idea of an EU force to monitor any ceasefire on the ground. Ministers did not rule this out, but their focus was on the naval mission.

Operation Sophia was set up in 2015 to combat people smugglers operating from the Libyan coast and to enforce a UN arms embargo on the warring parties.

It was suspended as a naval mission in March last year after Italy objected to recused migrants being landed in its ports, and is now limited to aerial surveillance.

In a Facebook post, Italian minister Luigi di Maio demanded the arms embargo be respected and promised that Rome is “ready to play a leading role” in resolving the conflict.

Libya has been torn by fighting between rival armed factions since a 2011 NATO-backed uprising killed dictator Moamer Gathafi.

Most recently, Sarraj’s troops in Tripoli have been under attack since April from Haftar’s forces.

Clashes have killed more than 280 civilians and 2,000 fighters and displaced tens of thousands, despite a fragile ceasefire promoted by both Ankara and Moscow.

International Relations and CooperationSecurity SituationTrafficking and Migration
All
2020-01-20
asaeid
Previous Erdogan Says Did Not Send Troops to Libya Yet, Only Military Advisers
Next After the Berlin summit, what’s next for Libya?