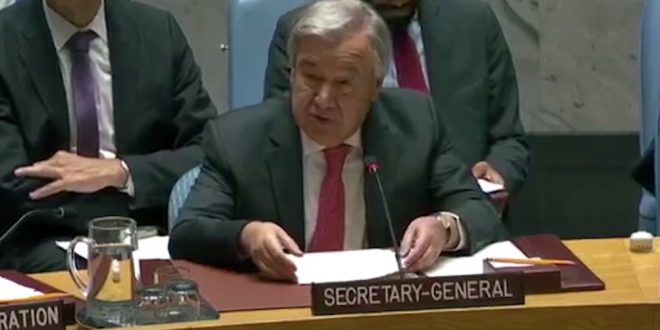 Libya’s civil war threatens to spill over into the already-restive Sahel and Lake Chad regions after becoming a “playground” for foreign forces in North Africa, UN Secretary-General Antonio Guterres said on Thursday.

World powers have stepped up pressure on the warring factions to resolve the years of fighting in recent weeks, though several have supported opposing sides in the Libyan conflict.

Currently, a fragile truce is in place, however, there have been reports of sporadic fighting and attacks on the international airport in the capital, Tripoli.

“Libya has been a centre, a cancer for arms export and fighters export … and the most worrying impact is of course with the Sahel and Lake Chad. And more and more these things are interlinked,” Guterres told Al Jazeera in Davos, Switzerland.

“What we are having with the Sahel and Lake Chad is a war with terrorist organisations that we are not winning. Terrorism is spreading. It is now threatening the countries of the coast – Ivory Coast, Ghana, Beni.”

Guterres asserted the current “security system in place” in the Sahel region was “not enough” and advocated for an “African force that is a peace-enforcing and a counterterrorism force” with UN Security Council financing.

Top diplomats from Libya‘s neighbouring countries and beyond met in the Algerian capital on Thursday amid intensifying international efforts to end the conflict tearing apart the oil-rich North African country.

The meeting included foreign ministers from Tunisia, Egypt and Chad, as well as diplomats from Sudan and Niger. Mali sent a representative while Morocco was absent from the talks.

All but Mali border Libya and all have suffered the fallout from the fighting between Libya’s UN-recognised leadership based in Tripoli and eastern-based forces led by renegade General Khalifa Haftar.

World powers are pushing both sides to respect the tentative truce.

Algeria’s government said the meeting was aimed at “consolidating coordination between countries neighbouring Libya and international players to accompany Libyans in reviving the political settlement process”, and to help Libya build solid institutions and restore stability.

Fayez al-Sarraj, head of the Tripoli-based Government of National Accord, and Haftar refused to meet in Berlin at a Libya peace summit last weekend and are not participating in the Algeria talks.

He said his country would support efforts by the UN to harden the fragile truce through a meeting between representatives of al-Sarraj and Haftar’s Libya National Army.

Haftar’s forces, which control the east and much of the south, receive support from the United Arab Emirates and Egypt, with evidence France and Russia also contribute.

The Tripoli-based government is backed by Turkey and to a lesser degree Qatar and Italy.

“What has happened in Libya is that it became a playground of neighbours and other players,” Guterres said.

“Libyan people deserve peace. One of the things that was achieved in Berlin was for foreign powers to agree not to interfere in the internal affairs of Libya.”

Guterres said there was an element of hope in achieving peace because of how “serious the situation became”.

International Relations and CooperationPolitical TransitionSecurity Situation
All
2020-01-23
asaeid
Previous Sanalla: Libya’s oil output to hit the lowest level since 2011
Next Among the Syrian Militiamen of Turkey’s Intervention in Libya