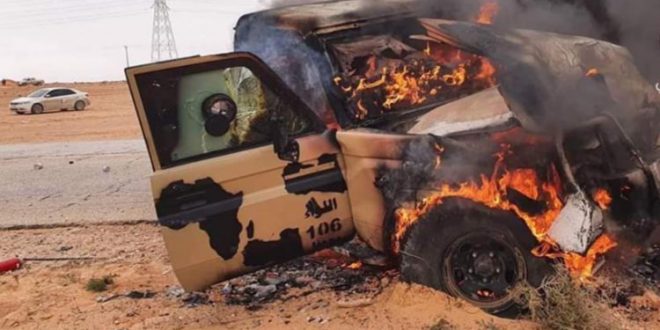 Eastern Libya’s military commander Khalifa Haftar on Sunday sought to open a new front by moving forces towards the city of Misrata, which is allied to the internationally recognised government, officials and residents said.

The pick-up in fighting erodes a shaky truce and comes a day after the United Nations warned that an arms embargo was being violated by foreign powers backing rival Libyan camps, Reuters reported.

The UN mission in Libya said on Saturday that numerous cargo flights bringing advanced weapons, trucks and fighters from countries that took part in the summit have been landing in western and eastern Libya.

In a statement published overnight into Sunday, the UN mission said it “deeply regrets the continued blatant violations of the arms embargo in Libya”, AFP reported.

“The mission condemns these ongoing violations, which risk plunging the country into a renewed and intensified round of fighting,” the UN mission added.

The United Arab Emirates, Egypt, Russia, and Turkey had agreed with western powers at a summit in Berlin last Sunday to push for a lasting ceasefire and uphold an existing arms embargo.

Fighting between the LNA and forces from Misrata was centred on the town of Abugrain, 120km (75 miles) east of Misrata itself, both sides confirmed.

Two LNA fighters were killed and eight wounded, an LNA source said, adding that his forces later retreated, taking some prisoners with them.

In April, Haftar launched an offensive on Tripoli and has made small gains with the help of Russian and African mercenaries.

The Libyan general abandoned talks on a ceasefire in Moscow this month and blocked oil fields during the Berlin summit, which has so far caused reported losses to the Tripoli government of about $256m.

The LNA is backed by the United Arab Emirates and Egypt, while Turkey supports the Tripoli prime minister, Fayez al-Serraj.

Speaking during a visit to Algeria, Erdogan said Libya “should not be allowed to turn into a playground for terrorist organisations and warlords”.

Before leaving for Algeria, Erdogan said Haftar’s forces had repeatedly violated the ceasefire. “He’s continuing attacks with all his resources. However, he will not be successful here.”

Libya has had no stable central authority since the toppling of Muammar Gaddafi in 2011. It has had two rival governments, in the east and the west, for more than five years, with streets controlled by armed groups.

In Berlin, foreign powers agreed to form a special committee made up of five military officials from each side to shore up the shaky truce. They are due to meet for the first time this week in Geneva.