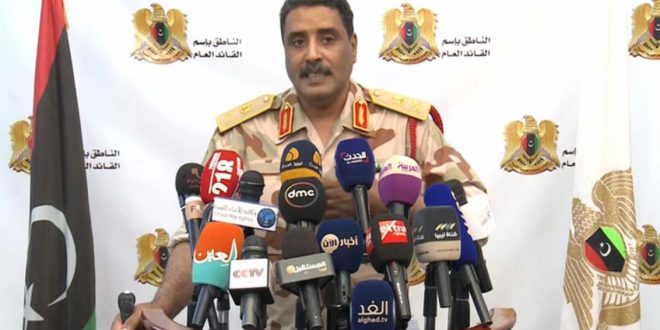 The spokesman for Khalifa Haftar’s forces, Ahmed Al-Mismari, said going to international conferences wasn’t because they were searching for a political solution since they are convinced that the solution is through the “rifle and ammunition”.

Al-Mismari said in a press conference on Sunday that there’s no way for withdrawing their forces from Sirte or any other positions they have controlled, adding that the battle will continue against “terrorists, criminal militias, smugglers and Syrian mercenaries”.

He explained that Abu Grein attack, which left over 20 of Haftar’s fighters killed and other injured, was a preemptive attack that aimed to “test the power of the militias” and to prevent them from advancing, saying it wasn’t a violation of the ceasefire.

Al-Mismari said Erdogan’s latest statements about Haftar were a violation of the ceasefire and a provocation to “the Libyan Arab Armed Forces”.

Meanwhile, the Libyan Presidential Council called on the countries and organizations participating in Berlin conference to take up their responsibilities against the repeated breaches of the ceasefire by Khalifa Haftar’s forces.

In a statement on Monday, the Presidential Council said it would reconsider participating at any upcoming dialogues, blaming the sponsors of the ceasefire for the lack of commitment by the “aggressor”.