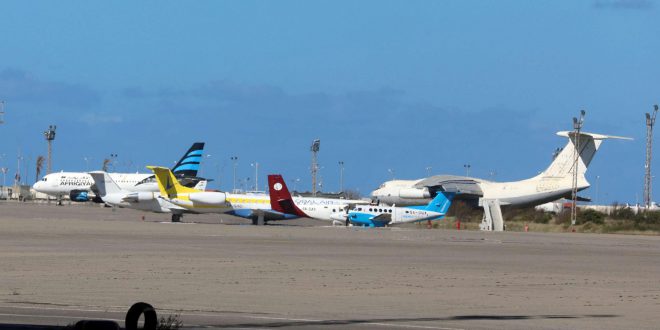 The Libyan capital’s sole functioning airport came under renewed fire Sunday, as fighting broke out hours after the UN mission in the country condemned ongoing violations of an arms embargo.

The UN mission in Libya, UNSMIL, condemned “in the strongest possible terms” the rocket strikes on Tripoli’s Mitiga airport, which has been hit by repeated attacks in recent months.

UNSMIL said in a statement Sunday evening that the strikes had wounded at least two civilians as well as damaged the tarmac and a number of buildings at the airport.

World leaders met in Berlin last weekend and committed to ending all foreign meddling in Libya and to upholding the 2011 UN Security Council weapons embargo as part of a broader plan to end the country’s conflict.

They also agreed to a permanent ceasefire and steps to dismantle numerous militias and armed groups, while pushing a political process under the UN.

But fighting broke out on Sunday in the Abu Grein region, 130 kilometres (80 miles) west of Sirte, according to sources on both sides of the conflict.

Libya has been mired in chaos since a 2011 uprising that killed longtime dictator Moamer Ghadaffi, with two rival administrations latterly vying for power.

The conflict deepened last year when military strongman Khalifa Haftar, who controls much of the south and east of Libya, launched an assault in April to seize Tripoli, base of the UN-recognised Government of National Accord (GNA).

On Saturday, the UN had said it “deeply regrets the continued blatant violations of the arms embargo in Libya”.

“Over the last 10 days, numerous cargo and other flights have been observed landing at Libyan airports in the western and eastern parts of the country, providing the parties with advanced weapons, armoured vehicles, advisers and fighters,” it added.

UNSMIL said the ceasefire, which had provided much-needed respite for civilians in Tripoli, was now at risk of collapse.

“This fragile truce is now threatened by the ongoing transfer of foreign fighters, weapons, ammunition and advanced systems to the parties by member states, including several who participated in the Berlin conference,” it said.

On Sunday, Germany’s foreign ministry backed the UNSMIL statement and voiced concerns about “a series of unconfirmed but credible reports of embargo violations on both sides”.

Haftar has the backing of Egypt, the United Arab Emirates and Russia while the GNA is supported by Qatar and Turkey.

On Sunday, Turkish President Recep Tayyip Erdogan travelled to Algiers for talks with his Algerian counterpart on Libya’s crisis and the January 12 ceasefire, which Moscow and Ankara brokered. Algeria shares a common border with Libya of some 1,000 kilometres (620 miles).

Ahead of his departure, Erdogan lashed out afresh at Haftar, calling him a “putschist” and claiming he was “constantly behind violations of the ceasefire”.

The UN says the fighting since last April has killed more than 280 civilians and over 2,000 combatants, while thousands have been wounded on both sides. More than 170,000 Tripoli residents have been displaced.

The UN is hoping to hold inter-Libyan talks soon in Geneva to consolidate the sagging truce, as its mission in the country warns of “a renewed and intensified round of fighting”.

A military commission established at the Berlin summit – comprising five GNA loyalists and five Haftar delegates – has been tasked with defining ways of making the truce hold.

“What’s important now is to achieve a stable ceasefire, which the military committee ‘5 + 5’… wants to negotiate in the coming days,” the German foreign ministry said.

Ankara dispatched troops – in a training capacity, it said – to support the GNA earlier this month in a move criticised by European powers and US President Donald Trump.

Western powers are keen to stabilise Libya – home to Africa’s largest proven crude reserves – because of concerns Islamist militants and migrant smugglers, already active, will take advantage of the chaos.

Libya’s National Oil Corporation said Saturday that oil production had plunged by around three-quarters since pro-Haftar forces launched a blockade the day before the Berlin summit, causing estimated losses of over $250 million.