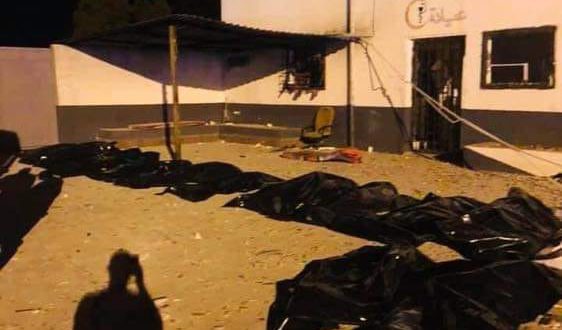 UN report: Warplanes in support of or belong to Haftar killed Tajoura immigrants

The United Nations (UN) confirmed in a report on Monday that foreign warplanes supporting Khalifa Haftar or belonging to his forces are responsible for killing at least 53 immigrants at the Tajoura detention center in last July.

The report added that Haftar’s warplanes carried out two airstrikes on the detention center as the first hit vehicles maintenance workshop and the second hit the immigrants’ trailers, leading to the killing of 53 immigrants, saying the detention center in Tajoura is a civilian target and is well known to all parties.

The report said all parties to the conflict knew the precise location and coordinates of the Tajoura Detention Center, which was previously hit by an airstrike in May 2019.

The report cites a previous UN report in last September, saying the Panel of Experts found evidence that several airstrikes by Haftar’s militias were taking off from AL-Khadim and Jufra airbases.

The report also said the airstrike could have been carried out by precisely-directed missiles from modern aircraft that are owned and operated by a UN Security Council member state supporting Haftar’s forces.

The Panel of Experts said the name of the country wouldn’t be publicized until material evidence or more photos are obtained.