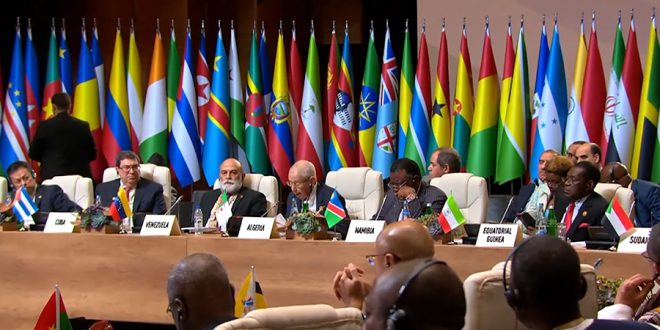 African Union leaders are expected to renew calls for greater involvement in efforts to resolve Libya‘s long-running conflict at a summit held on Thursday in the Republic of the Congo.

The meeting in Brazzaville will be held almost two weeks after international stakeholders – including many who back opposite sides in the months-long battle over Libya’s capital, Tripoli – gathered in Berlin and agreed to push the warring sides for a permanent ceasefire and respect an existing United Nations arms embargo.

The oil-rich North African country has been beset by war and insecurity since the 2011 overthrow and killing of longtime leader Muammar Gaddafi during a NATO-backed uprising, with rival factions and militias fighting over control of the county.

Libya has since been split into rival western and eastern administrations: The UN-recognised Government of National Accord (GNA) holds Tripoli in northwestern Libya, while a rival administration in the east is aligned with renegade military commander Khalifa Haftar, whose forces in April 2019 launched a military offensive to seize the capital.

“The whole African continent is worried about the consequences of what is happening in Libya,” Senegalese President Macky Sall said on Tuesday during a press conference with Turkish President Recep Tayyip Erdogan in Dakar.

Sall called for the bloc’s involvement “in any search for a solution”, which he said could only be political.

The push for greater AU say is led by the countries bordering Libya, especially in the Sahel, which fear the crisis will have a greater knock-on effect on an escalating conflict with armed groups operating across the region including in Chad, Niger, Mali, Burkina Faso and Mauritania.

The worsening violence in the Sahel involves fighters linked to al-Qaeda and ISIL and last year killed more than 4,000 people.

At the root of the Sahelian countries’ concerns is the number of arms flowing into the region from Libya.

“There’s no doubt that the 2011 war in Libya had ripple effects across the Sahel in the form of weapons being transferred from Libya into neighbouring countries to the south,” Claudia Gazzini, senior Libya Analyst for the International Crisis Group, told Al Jazeera.

“What that is creating is a different perspective between Sahel countries and European countries on what the solution in Libya should be,” she added.

Divisions among European countries, particularly France and Italy, have hampered efforts to find a solution to the conflict, with Rome backing the UN-brokered GNA and Paris widely seen as supportive of Haftar.

In Africa, “Chad sees Haftar, as the necessary strongman for Libya. It has encouraged other African countries to take a pro-Haftar line … at the expense of support for the GNA who Sahel countries do not see as a strong and long-term counterpart,” Gazzini said.

Heni Nsaibia, a senior researcher for The Armed Conflict Location and Event Data Project (ACLED), said “the links between Libya and the Sahel consist of movements by Sahelian (mostly JNIM) militants back and forth between the two locations,” especially along Libya’s border with Niger and Algeria.

“The links to Ubari are strong,” he told Al Jazeera.

Located in southwestern Libya, Ubari has long been used by al-Qaeda in the Islamic Maghreb (AQIM) and Ansar Dine fighters for leisure and recovery. Several senior AQIM trainers have been repeatedly targeted by US drone strikes there.

Niger meanwhile shares a border with Nigeria to the south, which has allowed armed groups from all three countries to form a geographical chain from North to sub-Saharan Africa – for example, Islamic State in the Greater Sahara (ISGS) was recently incorporated into Islamic State West Africa Province (ISWAP) or Boko Haram, which has its origins in Nigeria.

“The Sahel is suffering from this crisis. Proliferation of arms in the region has facilitated the spread of terrorism,” Chad’s Foreign Minister Mahamet Zene Cherif said last week.

The Brazzaville gathering will not the first time the AU has sought to play a more prominent role in solving the Libyan crisis. Previous efforts however have failed, including an unssuccesful bid last year for a joint UN-AU envoy for Libya, and Thursday’s meeting of the African Union High Level Committee on Libya looks unlikely to offer a breakthrough.

“The AU has been in and out of peace negotiations in Libya for the last 10 years,” Judd Devermont, Director of the Africa Program at the Centre for Strategic and International Studies, told Al Jazeera.

“The African Union regards Libya as within its mandate, even though its peace initiatives there have consistently fallen flat,” he says.

Libya remains a top priority of the UN Security Council, and so far the body has given little attention to AU calls for more involvement.

Egypt, another stakeholder in the peace talks which shares a border with Libya, sees Libya as an Arab issue and is also unlikely to give backing to any-AU brokered peace deal.

When peace talks started nine years ago, African presidents who tried to become involved in brokering peace found difficulties establishing links with rebels based in Bengazi.

AU countries meanwhile have only a small diplomatic presence in Libya and in neighbouring Tunisia, where many of the international stakeholders’ embassies are located and meetings on peace in Libya usually take place.

“They keep a relatively low profile apart from demanding a greater role to solve the conflict,” Gazzini said. “This demand is not matched with political knowledge about the conflict.”