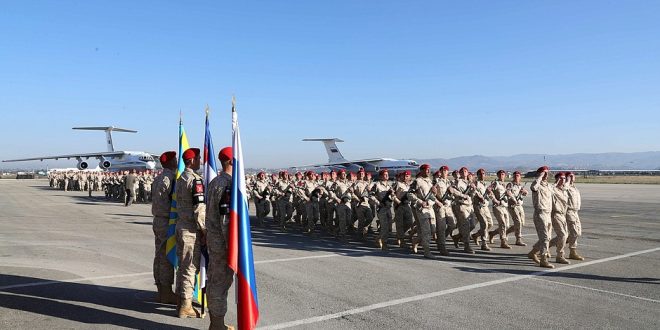 The Russian army has started to recruit youths from Syria’s Douma in eastern Ghouta to send to Libya to fight alongside the Libyan National Army (LNA), commanded by Khalifa Haftar, revealed Syrian opposition sources.

The Russians have requested that 50 Syrians be sent to the North African country. They will receive a monthly salary of 800 dollars for three months of service. They will also be exempt from mandatory military enlistment and immune from security prosecution.

Meanwhile, in Libya and only hours after the United Nations Security Council issued a resolution calling for a ceasefire in Tripoli, clashes renewed on various fronts between the LNA and forces loyal to the Government of National Accord (GNA). Intense fighting was reported at the Ain Zara and Khallet al-Forjan areas.

Fighting was also reported in the coastal western city of Misrata where the LNA carried out a series of air raids against terrorist groups and mercenaries in the Wadi Zamzam and al-Qadihieh areas east of the city.

In Tripoli, Mitiga airport was reopened after a brief closure after missiles were fired towards it.

In Rajma on the outskirts of the eastern city of Benghazi, Haftar received Italian Foreign Minister Luigi Di Maio. Talks focused on securing marine borders, preventing the infiltration of terrorist and criminal gangs and combating terrorism.

Di Maio had earlier paid a visit to Tripoli where he met with GNA chief Fayez al-Sarraj.

Separately, the LNA announced that Haftar had received an invitation from President Emmanuel Macron to visit France. The LNA chief had received a French delegation on Wednesday.

The military also condemned accusations by the UN mission in Libya that the LNA had prevented UN planes from landing in Libyan airports. It clarified that it had received UN planes at all airports that are secured by the LNA throughout the country, except Mitiga and Misrata that are beyond its control.

An LNA statement said it cannot guarantee the safety of planes landing in Mitiga and Misrata, adding that the UN mission’s claims “do not convey the truth to the local and international public and policy-makers at the UN.”

LNA spokesman Ahmed al-Mismari said the UN would have to use other airports and that the army could not guarantee the safety of flights at Mitiga because Turkey was using it as a military base.

Libya enjoys 35 civilian airports and landing strips that the UN mission can use in coordination with relevant authorities, he remarked. Just days ago, UN envoy to Libya Ghassan was in Benghazi where he was welcomed.