Libyans mark 9 years since start of uprising that removed Gaddafi

Libyans from a number of cities have gathered in the capital, Tripoli, to celebrate nine years since the beginning of an uprising that eventually toppled Muammar Gaddafi after 42 years in power.

Waving flags and playing music, the large crowds took to the streets to mark the 2011 uprising that began in the coastal city of Benghazi.

But nearly a decade later, the power vacuum that followed Gaddafi’s killing continues to fuel violent conflict, with the deeply divided country no closer to lasting peace amid a fierce contest by two rival administrations in the west and east.

This year’s celebration came as the internationally recognised Government of National Accord (GNA) in Tripoli is facing an offensive by the eastern-based forces of renegade military commander Khalifa Haftar.

“[They are] also denouncing the war crimes, as they say, committed by his [Haftar’s] forces, especially the targeting of residential areas in Tripoli,” he added.

The LNA has failed to breach Tripoli’s defences amid fierce fighting that has so far killed more than 2,000 people and displaced tens of thousands.

Haftar has received support from the United Arab Emirates, Jordan, Egypt and Russian mercenaries while Turkey has recently stepped up its support for the GNA.

Countries backing the warringhave repeatedly violated an arms embargo on Libya, according to the United Nations, which has recorded more than 100 violations since January 12, when the warring sides conditionally agreed to a truce.

While many on Monday marked the uprising’s anniversary, others said they had nothing to celebrate after 10 months of attacks.

“I swear the horror that this little girl has seen, no other child has witnessed in all of Libya,” she said while holding her daughter, weeks after her home in the outskirts of Tripoli was bombed.

Now she resides in a shelter along with other families.

“The whole building in front of us collapsed. The bombs were coming from all sides. Our home was completely destroyed. We could have been killed,” she added.

“There are so many tragedies. Huge problems and there’s people suffering even more than us. I don’t have an ounce of hope. There’s no security, [so] why and what are they celebrating? 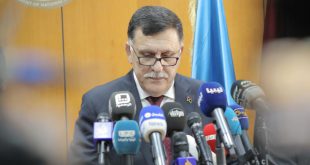