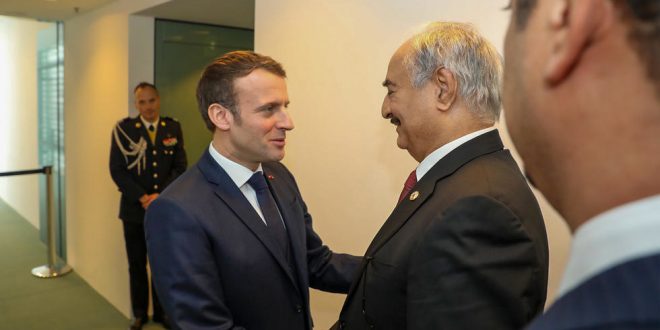 French President Emmanuel Macron met Monday with Libyan military commander Khalifa Haftar, who insisted he would commit to a ceasefire with the UN-recognised government in Tripoli as long as its militia fighters pledge to sign on as well.

Haftar “assured that he was ready to sign the ceasefire document, but this commitment would end if the militias do not respect it,” an Elysee Palace official said after the one-hour meeting, which was not announced on Macron’s agenda.

Haftar’s forces in Libya’s east have been battling the UN-recognised Government of National Accord (GNA) for control of the war-torn country since last April.

Their advance has stalled outside Tripoli, and representatives from both sides agreed to finalise a new ceasefire deal this month after recent talks in Geneva.

But a previous ceasefire brokered by Turkey and Russia last January has repeatedly been violated, raising doubts about whether a lasting truce will be reached.

Paris is backing the United Nations’ push for talks between the warring rivals, and Macron met separately with Haftar and GNA leader Fayez al-Sarraj in Paris last May.

While France says it favours neither leader, it has made clear it views Haftar as a key player for rebuilding Libya, having helped curtail Islamic terrorist activities in the large swathes of territory he controls.

They also discussed the intervention of foreign nations in the Libya conflict, after world leaders agreed in Berlin in January to end all foreign interference and uphold a weapons embargo.

That deal is under pressure after Turkey announced it had sent dozens of military trainers and pro-Turkish fighters from Syria to shore up the GNA.

Haftar is supported by Russia, though Moscow has denied claims that it has sent thousands of mercenaries from a private security company to bolster his offensive against Tripoli.