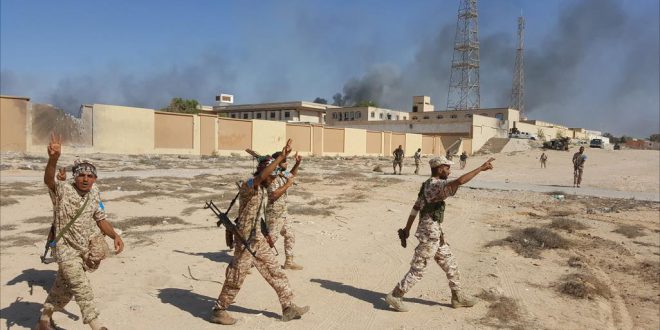 Libya’s Government of National Accord (GNA) has said the influx of foreign mercenaries to fight alongside rival factions risks exposing the war-ravaged country to the coronavirus, according to the Financial Times.

The Tripoli-based UN-backed government, which is fighting the Libyan National Army (LNA) led by rogue warlord Khalifa Haftar, accused a Syrian airline of transporting soldiers from the Syrian regime, Lebanon’s Hezbollah and Iran’s Revolutionary Guard of facilitating the spread of the deadly virus.

Russia, as well as UAE, Egypt and Saudi Arabia,is supporting Haftar in his offensive to capture Tripoli.

The presence of Syrian fighters in Libya could prompt a “health disaster”, the GNA interior ministry said this week, because of their close ties with Iran which has been especially hard hit by the virus, the FT reported.

Although there are no confirmed cases of COVID-19 yet in Libya, the GNA has taken pre-emptive measures such as closing restaurants and cafes at night, banning large gatherings and sealing its borders. However experts fear an outbreak could be catastrophic due to the country’s degraded health system.

The UN pleaded with Libya’s warring factions this week to cease hostilities to allow health authorities to fight against the new coronavirus.

Fierce fighting has followed Haftar’s operation to take Tripoli that was launched in April last year. A fragile truce entered into force on 12 January, but there have been repeated violations.

Syria’s Assad regime, backed by Russia, has recently been strengthening ties with Haftar’s administration, with Haftar opening a Libyan embassy in Damascus this month and Cham Wings opening an office in Benghazi.

The privately-owned airline was sanctioned by the US in 2016 over its links to the Assad regime.

Hundreds of mercenaries are thought to be fighting along Haftar’s ranks in Libya, and it is an especially attractive option for Syrian soldiers who can earn up to $1,500 a month, a far cry from salaries in their home country where the economy has been decimated by the civil war.