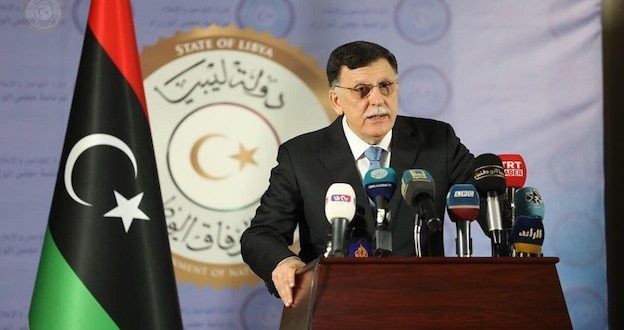 Al-Sarraj says Haftar is continuing his crimes despite Coronavirus concerns

The Head of the Presidential Council Fayez Al-Sarraj has said that daily attacks on civilian neighborhoods in Tripoli haven’t stopped, adding that several people, including children, have lost their lives in those violations at a time his government is trying to avoid a Coronavirus outbreak.

Al-Sarraj said in a statement on Sunday that Khalifa Haftar’s forces targeted Ain Zara and Old Town (Madina), which is a historical landmark in Tripoli, adding that the UN and several countries had called on Haftar to commit to a humanitarian halt of hostilities to allow concerned authorities to work on preventing a Coronavirus outbreak in the country, yet “they didn’t know that the aggressor (Haftar) had no humanitarian, religious or moral codes anymore.”

He also said that the aggressor thought his government was busy in fighting Coronavirus outbreak, so he doubled up his violations in away “as if he allied with the pandemic”, adding that the aggressor doesn’t care about peace as he looks for returning totalitarian rule even on “Libyans’ bodies”.

He also said that Haftar continues his terrorism and violations against civilians because he thinks he has impunity with some international condemnation statements that “aliken the aggressor and defender in Libya”.

“The international community should take responsibility in Libya by adopting a strict stance regarding the violations of Haftar in the country. We are keeping our right to respond to Haftar’s violations in Tripoli as perpetrators will never get away with their crimes.” Al-Sarraj remarked.