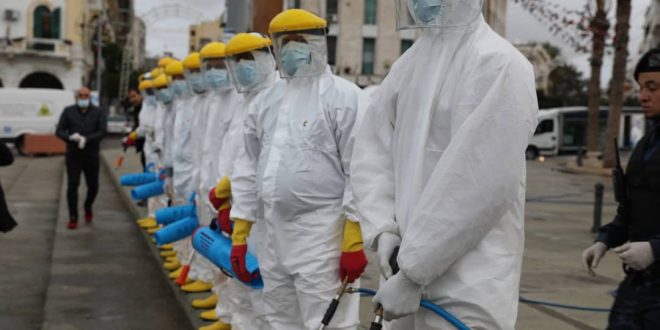 Visible efforts, making good optics, continue across Libya in an effort to mitigate against the spread of the Coronavirus (Covid-19) – in light of the country announcing its first, and so far, only case on Tuesday night.

In a recorded televised message tonight, internationally recognized Libyan Prime Minister, Faiez Serraj, applauded all these efforts, singling out the health cadres for their efforts – and taking a swipe at Khalifa Hafter for continuing to bomb Tripoli through the health crisis.

Libya’s 73-year old male Coronavirus patient, not of his own doing, has become somewhat of a mini celebrity, being Libya’s first Coronavirus victim. He was visited by the Health Minister accompanied by television cameras while donations of his meals arrived at the Tripoli Central Hospital (Al-Markazi)

Libya’s National Centre for Disease Control (NCDC) had announced that it would conduct follow-up procedures and trace all those who the patient had interacted with since his return to Libya from his trip to Saudi. Today they announced that they had all tested negative for Covid-19.

Libya’s country-wide 6pm until 6am curfew which commenced on 22 March has, on the whole held, but streets can be quite jammed when it is over. Many are crowding to stock up fearing possible shortages. Eastern Libya has a similar curfew in place, watered down from 24 hours due to public pressure.

State institutions that are needed for life to continue must operate with minimum staffing and prevent large gatherings of staff.

The curfew called on state security and justice entities to implement the curfew and warned that curfew breakers will be liable to punishment under existing laws. Some municipalities have been strickter in its implementation than others. Some curfew breakers have been fined or their cars confiscated.

There has been no shortage of public service announcements, online videos and pamphlets about mitigating the virus ranging from social distancing to hand washing.

There has been a huge effort to sterilize roads and public buildings and spaces, markets and parks. Municipalities have come into their own during the crisis, often leading in their local efforts leaving the central state behind.

Moreover, the general public have also been getting behind the efforts with grassroot efforts to finance or supply medical goods, manufacture face masks, deliver provisions, money and bread.

Sadly, however, while this continues at one level, the war for Tripoli continues with another night of fighting reported overnight – in total violation and disregard for the humanitarian pause called for by the international community and UNSMIL – and agreed to by the two fighting parties.