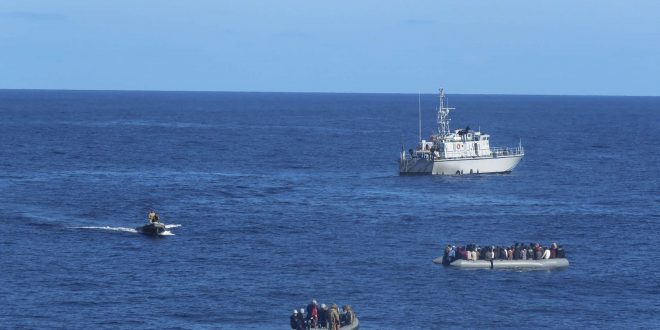 The European Union announced on Tuesday the launch of a new naval mission in the Mediterranean Sea aimed at enforcing the UN arms embargo on Libya, after Italy blocked a previous operation claiming that the warships attracted migrants to Europe’s shores.

The new operation, dubbed Irini, the Greek word for “peace,” will start work for a year from Wednesday. The European Council said it will have as “its core task the implementation of the UN arms embargo through the use of aerial, satellite and maritime assets.”

“In particular the mission will be able to carry out inspections of vessels on the high seas off the coast of Libya suspected to be carrying arms or related material to and from Libya,” a statement said. It will also gather information about illegal fuel and oil smuggling from Libya and help build up the Libyan coast guard, including by training its personnel.

Italy’s previous populist government blocked Sophia from using ships because its vessels were occasionally used to rescue migrants. Planes and drones were still used. The current government was also vary wary about resuming any operation, and Austria also initially opposed it.

Aid groups were shocked by the seemingly absurd prospect of a naval operation without any boats and accused the EU of abandoning people seeking refuge. While it has no migrant-related mission, ships involved in Operation Irini will be obliged to save people they come across in danger at sea, under international law.

“Diplomacy cannot succeed unless it is backed by action. The UN arms embargo on Libya needs to be effectively enforced,” EU foreign policy chief Josep Borrell told reporters as he unveiled the operation. He said the EU sees Irini has “an important part of the solution to contribute to a permanent cease-fire.”

Borrell said that while the operation will focus mostly on maritime surveillance, its planes, drones and satellites will be able to monitor airspace and some activities on land in, around and over the conflict-torn country.

Fighting in Libya has raged for almost a year between military commander Khalifa Haftar’s forces, which are allied with a rival government based in eastern Libya, and an array of militias in the west loosely linked to the authorities in Tripoli, the capital.

Clashes between rival Libyan forces have escalated in recent days despite appeals for a ceasefire, particularly given fears that the coronavirus could devastate a country with ravaged infrastructure and dire medical shortages.

Borrell expressed regret that those appeals appear to have fallen on deaf ears, saying “nobody can afford two wars at the same time.”

Border ManagementInternational Relations and CooperationSecurity Situation
All
2020-03-31
asaeid
Previous Attacks on civilians in Tripoli continue as Haftar receives more support from UAE
Next Coronavirus: Libyans brace for uncertainty as the country battles war, economy and virus