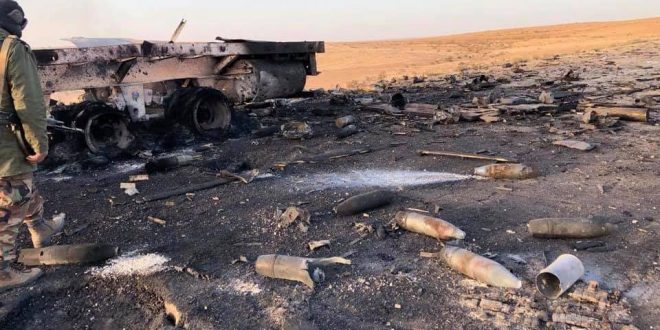 The media office of Volcano of Rage Operation said Thursday that Air Force warplanes had destroyed three trucks in Tininay area in south Bani Walid, adding that they were laden with ammunition, artillery rounds and Grad rockets in route to Khalifa Haftar’s forces in south Tripoli.

According to sources, several Russian Wagner Group mercenaries were in the trucks and at least one of them was killed and another injured then sent to a clinic in Bani Walid under heavy security.

Meanwhile, surveillance aircraft (L39) for the GNA Air Force crashed Thursday due to a mechanical fault as it was carrying out a mission over Al-Wishka, according to Libyan Army Air Force’s Operations Room, which added that the pilot and co-pilot survived and were sent to Misrata in good health conditions.

According to observers, Libyan Air Force of the GNA has been ramping up operations and controlling most of the skies over frontlines from south Tripoli to Al-Watiya and to western Sirte in Al-Wishka and Al-Jufra airbase, which could signal a change on the ground in the year-long war in Tripoli.