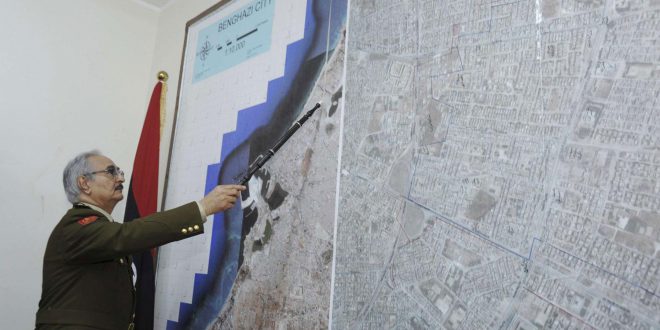 This Saturday marks a year since Libya’s Khalifa Haftar ordered his self-styled Libyan National Army (LNA) to march on Tripoli to expel the Government of National Accord (GNA). On 11 April last year, MEMO published an article that said Haftar could not retreat as to do so at the time could have brought about his political and military demise.

One year on and the stakes have gone up, so that accepting a conditional ceasefire would be a big risk for the general. This was demonstrated by his refusal to sign a Russia-Turkey mediated ceasefire document during his visit to Moscow on 13 January. Moreover, the UN organised meetings of a joint LNA-GNA military commission in Geneva, tasked with agreeing a permanent ceasefire; the effort ended in failure after two rounds of talks.

The LNA offensive on Tripoli has widened the proxy war, bringing more countries and foreign fighters into the field. Yet neither side has managed to make a breakthrough and gain any sizeable territories. Although the LNA took the strategic coastal city of Sirte 500 km east of Tripoli in January, that victory failed to be translated into any further gains on the road to the capital. Even if the LNA could advance beyond its current positions west of Sirte, it would still have to deal with formidable Misrata, the semi-state city in western Libya enjoying direct access to Turkish arms, drones, mercenaries and ammunition.

Closer to Tripoli, particularly around its devastated airport, the fighting has not stopped, despite the ceasefire agreed in Moscow but never formalised. While no major battles have been fought, intermittent fighting has continued without any gains for either side. What one side loses in any particular week it is likely to regain in the next, and vice versa.

Serious fighting did take place in the last week of March around Abu Grain, though, where both sides claimed victory. The little town nearly 400 kilometres to the east of Tripoli, saw heavy fighting in which drones were used; serious casualties were reported by both sides. Misrata’s well-armed militias are supporting GNA and suffered big losses.

LNA troops laying siege to the southern outskirts of Tripoli have failed to gain more ground in the advance on the capital. However, slow progress can be seen around the Ain Zara front line and Salaheddin districts, southeast and south of Tripoli respectively. I went as close to the front line as possible in that area two weeks ago and noticed that almost all of the apartments, houses and even the Diabetes Hospital have been evacuated. At least one house was being used by the LNA fighters. A guard at the hospital explained that everyone had been asked to leave because of the approaching front line. Tripoli’s city centre is less than 12 kilometres to the north.

The past two weeks have witnessed the heaviest bombardment since January across the entire area from Ain Zara to Abu Salim, south-west of Tripoli. While more people have been displaced, little else has been achieved. Even with the threat of coronavirus Covid-19 spreading in the country, heavy shellfire is a daily occurrence, but life goes on as people rush to buy basic necessities while shops are open from 2pm to 7am the following day.

What has changed over the past 12 months of fighting? Desperate to stay in power in the face of the LNA attack, the GNA signed an ambiguous security accord with Turkey on 27 November in which Ankara committed itself to supplying the government with weapons and fighters. President Recep Tayyip Erdogan admitted in February that his country has sent Syrian mercenaries alongside Turkish “advisors” to beef up the GNA defences. Furthermore, the use of drones by both sides has increased. Turkey is known to have at least two drone command centres in Miatiqa Airport, east of the capital and in Misrata. The LNA air force and foreign-supplied drones have targeted both locations on many occasions.

The LNA attack on the capital has also ensured wider Russian involvement in the nine-year-old conflict. While Moscow is denying that it has any role in the bloodshed, it does recognise the presence of mercenaries from Russia’s Wagner Group who are helping Haftar’s forces. Officially, Moscow has always denied any connection to the shadowy security company.

This drawn out battle only highlights the active role of foreign powers and the widespread use of sophisticated drones by both sides. Despite its commitments to stop sending weapons to Libya, Ankara is still doing so. The UAE and Egypt are helping the LNA and doing the same with total disregard for UN Resolution 2510, adopted on 13 February, which calls for all countries to refrain from sending any weapons to the North African country.

In the meantime, nothing is happening on the political front; mediation efforts have stalled following the resignation of UN envoy to Libya Ghassan Salame on 3 March citing “stress”. The UN, overwhelmed by the coronavirus crisis, is unlikely to appoint a replacement any time soon.

Khalifa Haftar is unlikely to accept even a conditional ceasefire despite the fact that his forces have failed to penetrate Tripoli. He might be able to hold on to the same positions that he held a year ago but little else. One year on, he is more determined than ever to do so, but is obviously less successful.