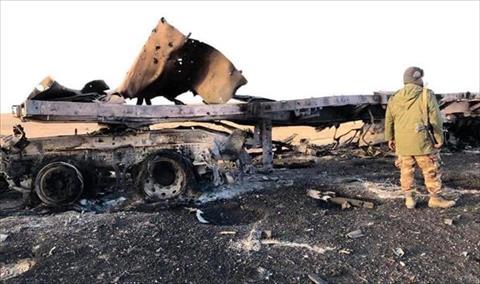 Libya’s UN-recognized Government of National Accord (GNA) said Friday that its Air Force strikes killed at least 25 fighters, including Janjaweed mercenaries loyal to Khalifa Haftar in the vicinity of Sirte, especially on Al-Wishka frontline.

The Fighters of Haftar’s forces were killed in several airstrikes that also targeted military vehicles, positions where militias are gathered and armored vehicles loaded with ammunition, in addition to a fuel truck.

The GNA has been under attack by Haftar’s forces since last April – exactly one year ago on April 04 2019 – with more than 1,000 killed and thousands injured as well as thousands displaced in the violence.

International efforts to reach a ceasefire have been hindered by Haftar’s side as they continue to target civilians in Tripoli amid the current health crisis of Coronavirus spread.