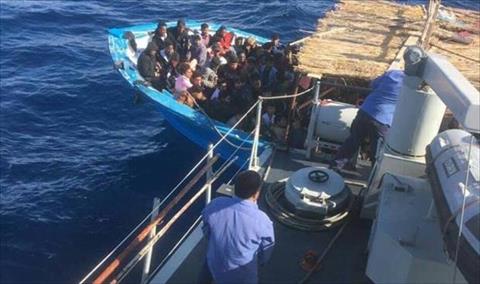 The Libyan coast guard rescued 280 migrants in distress in the Mediterranean Sea on Thursday and diverted them to the shores of the North African country, only to have them banned from disembarking, the UN migration agency said.

The migrants, exhausted after 72 hours at sea, remained stuck on an overcrowded coast guard ship after being denied entry in Tripoli. Heavy bombardment of the port area prevented them from stepping on land.

Fighting has engulfed the capital of Tripoli in recent months as eastern-based forces under the command of Khalifa Hifter have escalate their year-long siege.

Heavy shelling on Thursday killed one migrant worker and wounded six others from Nigeria and Ghana in Tripoli’s Tajoura neighborhood, according to health authorities in the UN-backed government. Shrapnel tore into one man’s leg, which had to be amputated.

Denied entry at Tripoli’s dangerous port, workers for the International Organization for Migration scrambled to hand out food and water to those on board the coast guard ship before a nightly curfew took effect because of the coronavirus.

As the weather has warmed and the Libyan war worsened, an increasing number of migrants have sought to make the perilous sea crossing to Europe, seemingly unconcerned by the coronavirus pandemic surging there.

More than 500 migrants set out from Libya this week, according to IOM. Around 150 of them were saved by an NGO boat and another 67 reached the Italian island of Lampedusa, where they entered a two-week quarantine because of COVID-19, the disease cause by the coronavirus.

At least 70 others have been stranded at sea for five days awaiting rescue after entering Maltese territorial waters, according to Alarm Phone, a crisis hotline for migrants in distress in the Mediterranean.

With the uptick in fighting driving migrants to sea and the coronavirus prompting countries to close their borders, aid workers fear that many more people may drown or get captured by the Libyan coast guard and returned to detention centers rife with abuse.

Two of the major charity groups in the Mediterranean, the Ocean Viking and Sea-Watch, have suspended their rescues because of the pandemic. Travel disruptions have forced the UN refugee and migration agencies to halt their resettlement flights for the most vulnerable people. Italy, a popular destination for asylum-seekers, has banned foreign-flagged migrant rescue ships from docking in its ports, citing fears over the pandemic.

The decree came after Italy denied a request for docking by the German-flagged rescue ship Alan Kurdi, which rescued 150 migrants this week but is still searching for a port willing to let them in.

“Given the desperation, we should not taken for granted that people won’t continue to flee,” said Hassiba Hadj Sahraoui, a humanitarian affairs adviser for Doctors Without Borders , which operates the Ocean Viking ship. “The biggest danger we’re facing now that Covid-19 will be used to justify measures that are purely about migrant control.”