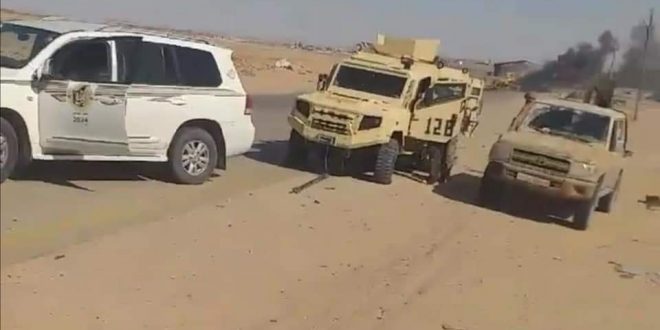 The Libyan Army under the command of the Government of National Accord (GNA) has regained full control of Abu Grein town after a failed advance attempt and attacks by Khalifa Haftar’s forces, said Army spokesman Mohammed Gununu on Sunday.

Gununu added that forces loyal to Khalifa Haftar had suffered major losses of lives and military equipment in their failed attack on Abu Grein, which saw heavy clashes since early Sunday.

Haftar’s forces started attacks in an attempt to advance under airstrikes’ cover with a multinational group of mercenaries – mainly Sudanese and Chadian – pushing GNA forces out of Qadahiya and Zamzam areas and then succeeded in entering Abu Grein with a brief control on the town for several hours.

However, when GNA forces received military backup from Misrata ans Zliten cities and Air Force drones started to fly over the area, they managed to tip the balance to their benefit and caused Haftar’s forces massive losses of both lives and military equipment.

Many photos and videos of burnt and captured vehicles as well as an Egyptian armored vehicle were posted by social media pages loyal to Volcano of Rage Operation forces, not to mention the photos of bodies of Haftar’s fighters killed in the fighting.

Meanwhile, sources from the Libyan Army said their defenses managed to shoot down Mi35 aircraft, which was confirmed by many pro-Haftar social media pages that said the three-pilot crew lost contact with the General Command of Haftar’s forces.

On southern Tripoli frontlines, there has been an uneasy calm with few skirmishes on Al-Tawaisha, Khallatat and Hamza Camp frontlines.