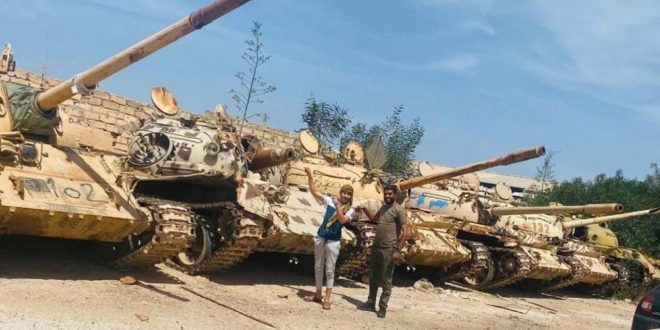 Libya’s Government of National Accord (GNA) captured three cities west of the capital Tripoli on Monday in a new advance against forces loyal to eastern militia leader Khalifa Haftar, according to social media accounts run by GNA forces.

According to GNA spokesperson Mohamed Qnounou, the forces of the UN-recognised government seized control of the cities of Sabratha and Surman west of Tripoli early on Monday, after a battle with Haftar’s self-styled Libyan National Army (LNA).

“Our brave forces have seized control of the cities of Sabratha and Surman, and are chasing the holdovers of the terrorist militias,” Qnounou said, according to the official Twitter account of the military operation.

“Our heroic forces have captured a number of Emirati armoured vehicles, Grad missile vehicles, and 10 tanks.”

The GNA-affiliated Twitter account shared footage purportedly showing captured armoured vehicles, which the LNA had been supplied by the UAE.

The pro-GNA Libya Observer website reported that its forces subsequently also captured the city of Al-Ajaylat.

Haftar’s LNA has been staging an offensive on GNA-held Tripoli for nearly a year.

The UAE, Egypt and Russia have been supporting the LNA militarily, while Turkey, Qatar and allied Syrian fighters are backing the GNA.

The two rival administrations have been vying for the control of the oil-rich country since the ousting of Libya’s longtime leader Muammar Gaddafi in 2011.

Fighting between the rival forces has continued to rage in recent weeks despite the threat posed by the coronavirus pandemic on the country’s fragmented and overstretched health system.