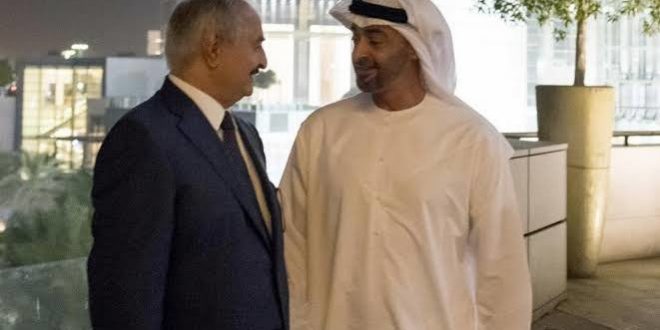 Almost 11,000 tonnes of jet fuel has been shipped by UAE-based companies to eastern Libya, in suspected violation of an international arms embargo, according to documents seen by the Financial Times.

The shipment – worth as much as $5m – was delivered last month to the city of Benghazi, which is a stronghold of military commander Khalifa Haftar, the FT reported on Monday.

Haftar has been fighting to capture Libya’s capital city Tripoli, seat of the United Nations-recognised Government of National Accord, since last April.

The FT said the shipment was currently under investigation by a UN panel of experts. The paper quoted Stephanie Williams, the acting UN envoy to Libya, as saying in the UN’s judgement jet fuel qualified as “combat supplies” and that therefore it would be a violation of an arms embargo placed on the country.

The documents stated that the fuel in the shipments was supplied by Afrifin Logistics FZE, based in the Sharjah emirate. It was loaded on to MT Gulf Petroleum 4, a Liberian-flagged tanker operated by Gulf Shipping Services FZC.

The fuel was offloaded at Benghazi on 16 March, a period when Haftar intensified air strikes and missile attacks on the Libyan capital.

The FT said it was unable to get a response from either the UAE or the companies named in the documents.

Russia, Turkey, Egypt, the UAE, Qatar and others have fuelled conflict in the North African country, with hundreds killed and over 150,000 displaced.

The country has been in a state of unrest since 2011, when rebels backed by a NATO air campaign toppled longtime ruler Muammar Gaddafi.

A number of states have thrown their weight behind Haftar, seeing in him a strong leader capable of cracking down on Muslim Brotherhood-aligned groups and restoring order in the country.

However, his forces have become notorious for looting, summary executions and collective punishment.