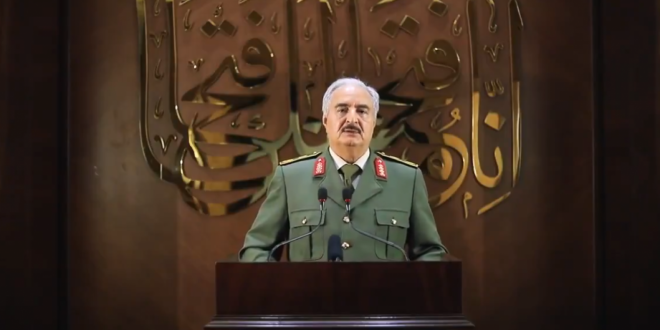 Military commander Khalifa Haftar has declared himself the ruler of Libya with a “popular mandate” from the people.

In a televised speech on Monday night, the leader of the Libyan National Army (LNA) announced that the General Command of the Armed Forces had “accepted the will of the people” to take over management of the country.

The move apparently marginalises an eastern-based civilian parliament that had until now been backing the military commander.

In his speech, Haftar added that a 2015 deal that produced the UN-recognised Government of National Accord (GNA), a unity administration based in Tripoli that was formed after years of civil conflict, was null and void.

“We announce our acceptance of the people’s will and mandate and the end of the Skhirat Agreement,” he said.

“The political agreement destroyed the country. We will work to create the conditions for building permanent civic institutions.”

Haftar’s forces, politically backed by the eastern parliament – nominally a signatory to the 2015 deal itself – have been staging an assault on the capital Tripoli since April 2019.

Although the LNA last year managed to advance into the southern suburbs of the city, it lost ground to pro-GNA forces during clashes this month.

The GNA is backed by Turkey, while Haftar is supported by the United Arab Emirates, Egypt and Russia.

A Russian source told Reuters on Tuesday that Haftar’s power grab was “surprising”.

The source said the most important thing now was for the military and political decisions reached at a conference in Berlin in January to be implemented by Libyans, with the assistance of the international community

“We support the continuation of the political process,” it said. “There is no military solution to the conflict.”

Libya has been in a state of unrest since 2011, when a Nato-backed uprising toppled longtime ruler Muammar Gaddafi.

Some Libyans, as well as numerous regional powers, have seen Haftar – who was a US-based former military commander under Gaddafi – as a potentially stabilising force in the country.

Others, however, have accused him and his forces of authoritarian tendencies and of committing war crimes, as well as trying to overthrow the UN-backed, internationally recognised government.

Last week the commander said Libyans should choose an institution to govern the country after the end of the Skhirat deal.

He raised the possibility of a “constitutional declaration”, which has concerned some who believe this could be a step towards a partition of the country.

“Haftar has once more exposed his authoritarian intentions to the world,” Mohammed Ali Abdallah, an adviser to the GNA, said in a statement.

“He no longer seeks to conceal his contempt for a political solution and democracy in Libya.”