Home / Normal / Can the UAE’s coup attempts in Libya and Yemen succeed? 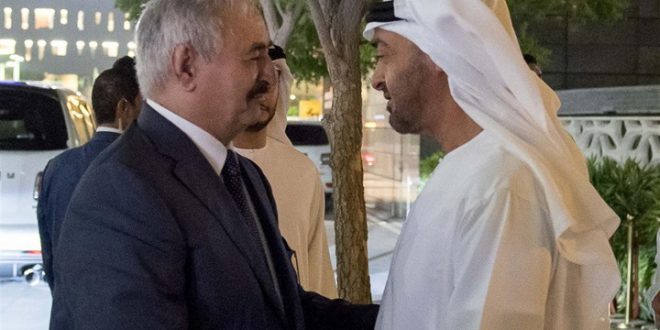 Can the UAE’s coup attempts in Libya and Yemen succeed?

In less than 48 hours, Yemen’s separatist Southern Transitional Council (STC) and Libya’s renegade warlord Khalifa Haftar rebelled against their respective governments, in defiance of previous peace initiatives. These moves could not have occurred were it not for the UAE’s hidden hand, as Abu Dhabi has empowered both factions in a bid to project power.

Early on 26 April, the STC declared “self-rule” in Aden, South Yemen’s capital prior to unification with the north in 1990 – effectively ending the Riyadh Agreement to unify its forces with the government of Abd Rabbuh Mansour Hadi.

Formed in 2017, the Southern Transitional Council is a secessionist movement focused on gaining independence for South Yemen. Comprising of 26 members, the STC includes five governors from Southern Yemen and two former government ministers.

The STC was subsequently created a month later, with Hadi describing the council as illegitimate.

The call for independence has been a source of contention for over a century. South Yemen’s origins can be traced back to 1874 when the British Empire created the Aden colony and Aden protectorate.

Following its independence from Britain, South Yemen was formed in 1967 and later became the People’s Democratic Republic of Yemen in 1970, a Soviet Union-backed Marxist-Leninist state, the only one of its kind in the Middle East during the Cold War.

The Soviet Union’s collapse led South Yemen to merge with the North to form a unified Yemen. That union, however, lasted only four years and led to the 1994 civil war, when South Yemen army units accused northern president Ali Abdullah Saleh’s forces of corruption.

In 2007, the Southern Movement, also known as the al-Hirak al-Janoubi, was formed. Its stated aims were to demand equality under the law and a change in relations between north and south in the context of a united Yemen.

In 2016, the UAE helped create the SBF in southern Yemen. The SBF included many militants who supported a secessionist movement in Southern Yemen.

Forces within the SBF supported the STC, with the aim of establishing an independent South Yemen state. Since its formation, the SBF has played a crucial role in the Saudi-led coalition before the recent escalation.

Its successes came in part due to being militarily backed by the UAE. The backing included training of SBF fighters in Abu Dhabi and the supply of military equipment.

After receiving training, the SBF was dispatched to fight Houthi forces operating inside southern Yemen.

Emirati backing was crucial in helping the STC gain Aden, which has been under its control since 2018.

The following night, Haftar declared himself the ruler of Libya with a “popular mandate,” stating his desire to “create the conditions for building permanent civic institutions”. This came with his annulment of the 2015 Skhirat agreement, which entailed a unity government with the Tripoli-based Government of National Accord (GNA).

Such unlikely timing may raise eyebrows. Given both factions’ crucial dependence on the UAE, it is possible that Abu Dhabi – despite its official rejection of the STC’s unilateral move – encouraged these simultaneous revolts against Hadi and the GNA – two governments that are not under Emirati patronage and restrict its efforts to control both countries.

As the STC faced pressure from Yemen’s government to implement the 2019 power-sharing Riyadh Agreement and the Turkish-backed GNA recently made gains against Haftar’s forces, these moves constitute a decisive attempt to secure their presence.

Abu Dhabi has worked to ensure both actors’ dominance, in order to secure its regional sphere of influence. Since 2014, the UAE has seen Haftar as a useful force to replicate its efforts in Egypt of installing an autocratic military regime, and thus took the Libyan warlord under its wing.

Abu Dhabi played a central role in building Haftar’s so-called Libyan National Army (LNA), and its fingerprints are on his ongoing campaign to seize Tripoli since April 2019 – often in such a subtle way that Russia’s role receives more of a negative spotlight, particularly in the West.

After Haftar stormed out of talks brokered by Russia and Turkey in Moscow in January, he evidently felt he had enough support from elsewhere – namely Abu Dhabi – to resume military operations, showing the UAE’s significant sway over the warlord and Libya itself.

Alongside its support for Haftar’s putsch, the UAE has financed and supported Yemen’s STC since its inception in 2017, as the faction demanded a southern state independent from Yemen’s north. While it dubiously claims to represent the interests of southern Yemenis, the STC itself is entirely propped up by the UAE.

Emirati air strikes against government forces after the STC’s coup in Aden last August showed it was keen to consolidate this separatist push. It sought to undermine the Riyadh Agreement brokered last year by Saudi Arabia, with continued support to separatist militias across the south and in the geostrategic Socotra Island.

The UAE seeks to control southern Yemen and its ports, particularly Aden and Socotra, to create a zone of influence over the Red Sea and to bolster its maritime trade. It aims to prevent these ports’, and therefore Yemen’s, independence; such a scenario could steer trade away from the UAE’s own commercial ports.

The UAE also seeks to undermine Libya’s independence, as a stable, oil-rich Libya could attract international investment and compete with Abu Dhabi. Even if Haftar cannot seize Tripoli, his recent revolt further ferments Libya’s divisions. The UAE is thus manipulating these actors to secure its own sway.

Both Emirati clients have displayed receptivity towards one another. Last August, STC vice president Hani bin Breik declared the council’s support of Haftar, stating it was ready to exchange “expertise and experience” with the LNA to deal with “the illegitimate militias” in Libya. The two factions promote the UAE’s own anti-extremism narrative to justify their military efforts, while claiming to be legitimate representatives of their subjected peoples.

Yet, to achieve its ambitions, the UAE faces obstacles, firstly in the form of its ally Saudi Arabia, around which it has worked closely to secure its influence in Yemen and to become dominant in Libya. There has been speculation over a growing “rivalry” between Saudi Arabia and the UAE over their divisions in Yemen, which are somewhat exaggerated.

The UAE has indeed established more concrete links in Yemen through empowering a vast network of STC-aligned militias, in contrast to Saudi Arabia’s diminishing influence through backing Hadi. And despite Saudi Arabia paying Haftar to launch his offensive on Tripoli, the UAE has overtaken Riyadh as Haftar’s leading patron.

Saudi Arabia most likely holds secret resentment towards the UAE’s more assertive and increasingly independent stance, particularly in Yemen. Yet, given their otherwise tight regional alliance – secured by a shared counter-revolutionary agenda and strong investment and military links – Riyadh is not prepared to confront Abu Dhabi. The UAE also values this alliance, treading carefully and pragmatically around Saudi Arabia while securing its own objectives.

Though Abu Dhabi has largely bypassed Saudi Arabia, the UAE must still take on the international community in its bid to project power in Libya and Yemen, to gain support for its client factions.

Despite southern provinces opposing the STC’s takeover attempts, along with other independent opposition groups and Adenis themselves, the faction has pursued PR efforts through spokespersons in global capitals, aiming to present itself as the only true representative of southern Yemen.

Likewise, Haftar has embarked on a diplomatic crusade to fashion himself as a remedy for Libya’s instability, in order to acquire international backing.

The STC is said to have used lobbying services, as documents from the US Foreign Agents Registration Act reveal. Coupled with the UAE’s own disinformation and lobbying efforts within US and European policy circles, while promoting its own narratives in think-tanks and media outlets, a powerful coalition operates to legitimise these Emirati-backed movements.

With Europe divided and therefore impotent over Libya, and with Washington’s ambivalent stance under President Donald Trump, the UAE has the freedom to empower Haftar, particularly with France’s support for the Libyan general. Even if Turkey’s military intervention to support the GNA restricts Haftar’s gains, the UAE will likely have established him as a force to be considered in any post-conflict settlement.

Achieving its goals in Yemen will prove more difficult, however, as the EU, US Secretary of State Mike Pompeo, and the UN envoy to Yemen, Martin Griffiths, have opposed the STC’s latest moves while calling to uphold the Riyadh Agreement. Yet the international community’s blind and inattentive support for this ineffective pact enabled the STC and the UAE to exploit it. Should the STC secure control of at least Aden, Socotra and other southern ports, this could partially boost Abu Dhabi’s objectives in the short term before it pursues greater control over southern Yemen in the distant future.

Ultimately, continued weapons sales from western states to the UAE offer a symbol of consent for its actions, meaning that Abu Dhabi still has enough impunity to establish its preferred factions’ de facto control in Libya and Yemen under the noses of western capitals.