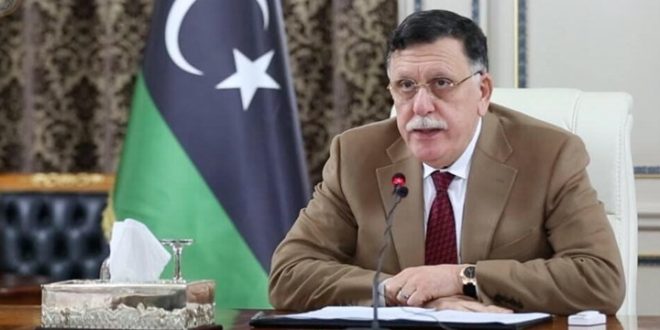 The Head of the Libyan Presidential Council Fayez Al-Sarraj welcomed Tuesday the political initiatives aiming to find a solution to the Libyan conflict, whether through amending the Libyan Political Agreement or agreeing on a constitutional basis and general elections.

Al-Sarraj called, in a statement posted by his media office, for unity to defeat the aggressor and end his dream of seizing power by force, referring to Khalifa Haftar, reiterating that he welcomes all political initiatives that call for peaceful solutions to the crisis away from force and military conflict in order to avoid bloodshed.

He also called on political parties to take up their responsibilities to end the division in Libya, urging for swift resumption of the UN-led political process to enter a new phase and agree on a comprehensive roadmap that brings together all Libyans.

“Be it by amending the Political Agreement and forming a new Presidential Council of a Head and two Deputies as well as a separate Prime Minister, or by agreeing on a constitutional basis that paves the way for general elections.” Al-Sarraj added.

He said the call comes at a time when the state is being divided and some individuals in state institutions are monopolizing decisions outside the scope of their authorities, thus worsening economic and financial conditions of Libyans, especially after the outbreak of Coronavirus and the ongoing offensive on Tripoli and other districts.

Al-Sarraj’s remarks came one day after the statement of the governor of the ​Central Bank of Libya (CBL) Al-Siddiq Al-Kabir who rejected reopening the foreign currency transactions’ system for individuals for the third time, saying opening it now at a time when the oil production is under a blockade will lead to draining the Libyan finances and send the country into poverty.

“The hike in foreign currency exchange rates to Libyan dinar on the black market resulted from a structural deficit in the economy and would need radical solutions. State of emergency measures are only legal when they are essentially necessary for confronting the reasons that led to the emergency announcement.” The governor of the CBL added in a statement to Al-Sarraj on Monday.