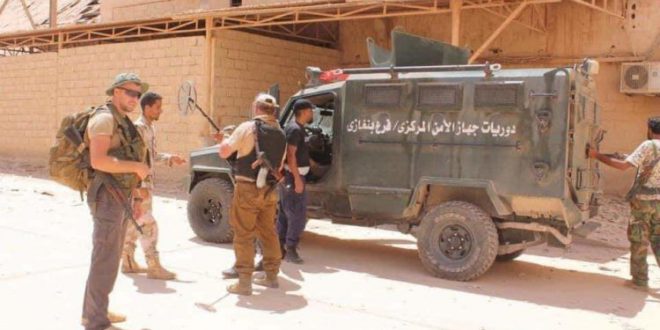 Rogue Libyan general Khalifa Haftar‘s military force is being bolstered by Russian operatives as part of large-scale efforts from foreign powers to aid the militia leader, according to UN experts.
Between 800 to 1,200 mercenaries have been recruited by the Wagner Group – a private military company headed by a close associate of President Vladimir Putin – to be used in Libya, where Haftar has laid siege to the capital Tripoli, currently controlled by the UN-recognised Government of National Accord (GNA).

According to the UN experts, who have written their first extensive report on mercenary activity in the war-torn country, at least 39 of the mercenaries are working as snipers on the front lines in the Libyan conflict.

The UN panel also published copies of a Russian-language map showing a training camp which was reportedly established by Russian mercenaries in southeastern Libya towards the end of 2019.

Despite Russia’s support for Haftar, the UN experts also noted strains between the military commander and Moscow. According to the report, Russia has met most of Haftar’s requests, however the general has not been so forthcoming, having restricted Wagner movements in Libya and withheld information.

Haftar, a Gaddafi-era military commander who heads the self-styled Libyan National Army, launched a campaign to seize Tripoli from government control last year. The two sides have remained locked in a conflict that has drawn in several foreign powers, including the UAE and Turkey.

Turkey and the UAE sit on opposite sides of the conflict, with Ankara having assisted the UN-backed Government of National Accord‘s military effort against Haftar.

The UN panel’s report also noted that Turkey has recruited thousands of former Syrian rebels to fight alongside the GNA in Libya. Haftar’s side, meanwhile, has flown in as many as 2,000 Syrians by the Damascus-based Cham Wings Airlines, according to the report.

The panel’s investigations into Syrian fighters in Libya are ongoing, however, the experts highlighted “credible” news of Russia recruiting Syrians. According to some reports, Syrians from the town of Douma were recruited with salaries of $800 per month.