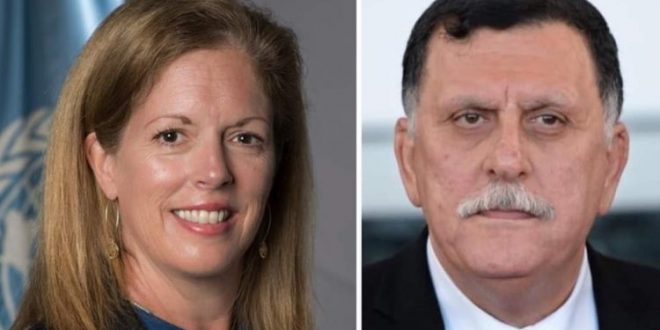 UNSMIL and Al-Sarraj discuss revival of political process in Libya

In a phone call today, Acting SRSG Stephanie Williams reviewed with the President of the Presidency Council Fayez Serraj the latest developments in Libya, including his recent positive statement which calls on all parties and political actors to urgently resume the political dialogue under UNSMIL auspices.

Acting SRSG Williams highlighted that this initiative and other recently announced and similarly positive initiatives, constitute a momentum that must be built upon to end the fighting and resume a comprehensive political process.

Williams stressed UNSMIL’s readiness to resume the intra-Libyan political track based on the Berlin Conference Conclusions & UNSCR 2510 – in a virtual setup, if needed.

She renewed her call on all parties to the conflict in Libya to cease all military operations immediately and spare the Libyan people further suffering.