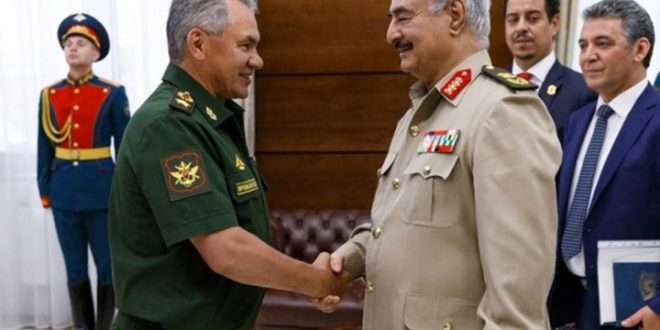 Russia to send Assad regime forces to fight for Haftar

Since April 24, a high-ranking Russian commander and his team have made a series of meetings with mercenaries fighting in Assad regime forces in Daraa, sources added.

In these meetings, Russia offered $1,000 and a 3-month renewable contract to the Syrian mercenaries, in exchange for their services in Khalifa Haftar’s ranks.

While one group of mercenaries refused, others accepted the offer.

Those who accepted the offer have been working to collect more mercenaries in Daraa.

These elements will be paid by Russia, and after training in Russian military camps in Syria, they will be sent to Libya.

International Relations and CooperationSecurity Forces
All
2020-05-07
asaeid
Previous ICC latest report to UN Security Council on Libya: Military commanders responsible for crimes committed by their forces
Next Al-Sarraj calls for complete monitoring of the arms embargo on Libya