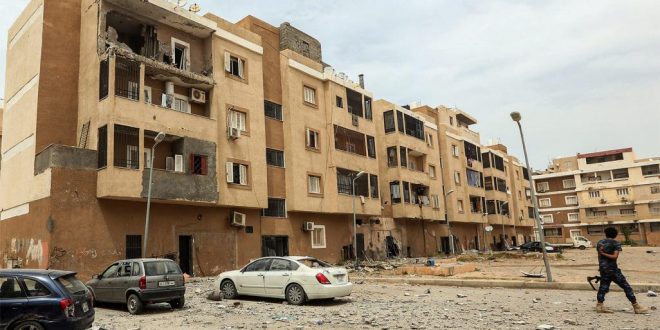 Militias loyal to Libya’s renegade commander Khalifa Haftar continued to attack civilian infrastructure in Tripoli as they targeted a hospital in the war-torn capital Thursday.

Tripoli Central Hospital and some civilian settlements were targeted, according to a statement by the press center of the Libyan Army-led Operation Volcano of Rage.

It said the hospital will not be able to serve people due to the attack, so patients will be severely affected.

It noted that the situation poses a major threat to the fight against the coronavirus outbreak.

The militias, however, have denied carrying out the attack.

According to the United Nations, since the beginning of this year, seven health centers in the country have been struck 12 times.

Haftar, the leader of illegal armed forces in eastern Libya, has intensified attacks on civilians since the beginning of May as the Libyan army recently gained an advantage and inflicted severe losses on his militants.

At least four civilians, including a child, were killed when rockets rained down on the capital Tripoli and its only working airport Saturday. Fighting between Libya’s internationally recognized government and the forces of putschist Gen. Khalifa Haftar over Tripoli intensified Saturday with heavy artillery shelling the sole functioning airport in the capital city, setting jet fuel tanks ablaze and damaging passenger planes, government authorities and the U.N. said, while the Libyan prime minister criticized the international community for indifference to Haftar violence.

Last Thursday, Haftar forces shelled an area in Tripoli where the embassies belonging to Turkey and Italy in Tripoli was shelled by Haftar forces. Libya’s Government of National Accord (GNA) said at least four civilians, including a child, were killed when more than 100 rockets rained down on the capital and its only working airport Saturday.

Libya’s government has been under attack by Haftar’s forces since April 2019, with more than 1,000 killed in the violence. It launched Operation Peace Storm on March 26 to counter attacks on the capital.

Following the ouster of late ruler Moammar Gadhafi in 2011, Libya’s government was founded in 2015 under a U.N.-led political agreement.

The GNA has been under attack by Haftar’s forces since last April, with more than 1,000 killed in the violence. The Tripoli government launched Operation Peace Storm on March 25 to counter attacks on the capital.