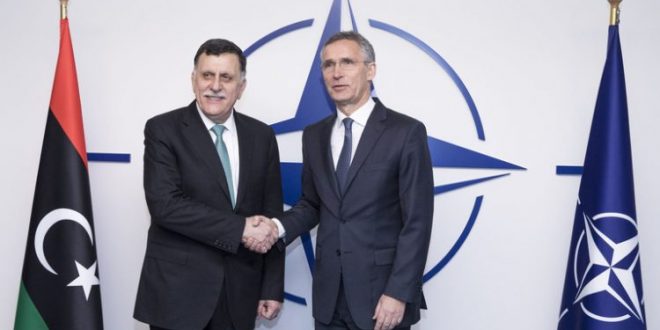 NATO concerned about Russia mercenaries fighting with Haftar in Libya

NATO on Saturday expressed its concern about the mercenaries sent by Russian company Wagner to help fight alongside Brigadier General Khalifa Haftar in Libya.

This came in a phone call between the NATO Secretary General, Jens Stoltenberg, and the Head of the Lhbyan Government’s Presidential Council, Fayez Al-Sarraj, according to a statement published by the latter’s media office.

During the phone call, the two officials discussed the military and security developments, and the seriousness of the security situation in Libya, due to Haftar’s attacks on Tripoli and its surroundings.

Stoltenberg stressed “the need to implement the arms embargo by land and air, and not only by sea.”

He added that “NATO only recognises and deals with the Libyan government, the legitimate government,” which is headed by Al-Sarraj.

Stoltenberg stressed that the targeting of civilians and infrastructure is “unacceptable”, adding “there is no military solution to the Libyan crisis.”

For his part, Al-Sarraj expressed his hope that “cooperation with NATO will contribute to achieving stability and security in Libya,” stressing his firm stance against the aggression.

Haftar’s militias have been fighting against the GNA for legitimacy and power in the oil-rich country, and continuing a faltering offensive that started on 4 April 2019, to take control of the capital Tripoli, the headquarters of the internationally recognised Government of National Accord (GNA).