Home / Normal / Gaddafi loyalists break up with Haftar, call him “a traitor” 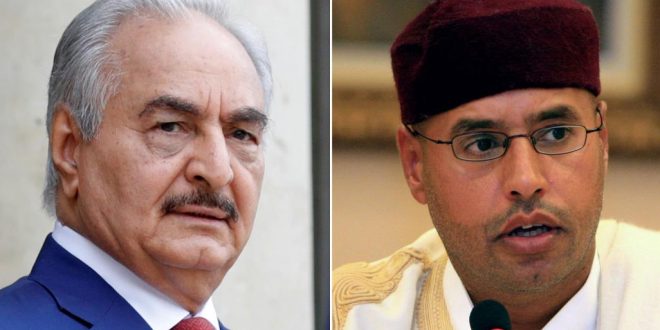 Gaddafi loyalists break up with Haftar, call him “a traitor”

Pro-Gaddafi Al-Jamahiriya TV issued a statement Wednesday accusing Khalifa Haftar and his forces of being linked to foreign agenda and described Haftar as a traitor and a foreign agent receiving his orders from overseas.

The statement slammed Haftar for his role in the current conflict, saying real commanders should fight on the battlefield not in their luxurious houses thousands of kilometers away from frontlines “doing commercial and political deals at the expense of the blood of the ordinary people”.

“We won’t be part of a virtual command that hasn’t even heard of the loss of Gharyan until three days later and Al-Watiya airbase until today. A command that hasn’t visited frontlines for over a year and half.” The Gadaffi loyalists’ statement says, adding that the tactical withdrawals and truces aren’t as they claim, but in fact, they are orders coming from overseas and they must be implemented.

They also slammed Haftar’s zero hour statements and delusional truces as well as the political mandate, saying they only believe in staying on the ground in Libya on the battlefield and that those who can’t be on the frontlines can’t be mandated for any role.

The statement was a response to Haftar’s spokesman Ahmed Al-Mismari who said their forces would move 2-3 kilometers away from south Tripoli frontlines to allow people to spend Ramadan days and Eid Al-Fitr celebration in peace.

In an earlier statement, Al-Mismari said their forces would withdraw from some southern Tripoli locations for “repositioning” as part of a “military tactic for mobilization of forces”.