Home / Normal / Why is Libya so chaotic and ungovernable? 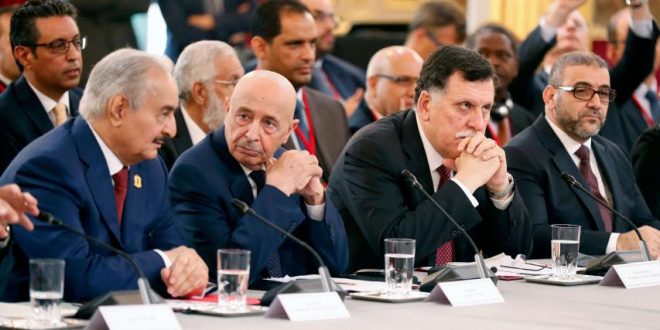 Why is Libya so chaotic and ungovernable?

The ongoing war in Libya did not start last year when Khalifa Haftar launched his attack to unseat the Government of National Accord (GNA) in the capital of Tripoli on 4 April, nor will it end when the current fighting stops. What Haftar achieved was to initiate another episode of the civil struggle that started with the help of outsiders back in 2011. The continuing conflict will end one day, and regardless of when or who will be victorious, it will not disarm nor disband the militias.

Libya’s erratic wars started, in part, by the United Nations (UN) in 2011. By authorising the use of force under Resolution 1973 of the UN’s Security Council, it, literally, invited every state to intervene in Libya, in whatever possible capacity. The justification made came under the pretext and rubric of the Responsibility to Protect (R2P) doctrine. R2P calls for “humanitarian intervention” to protect civilians when their own government cannot. The same doctrine was falsely used to explain the war on the former Yugoslavia in 1999. But Libya, in February and March of 2011, was able to protect its civilians and was just about to do so when intervention was authorised.

The background to all this was peaceful demonstrations, starting on 17 February against Muammar Gaddafi’s government, particularly in eastern Libya. The demonstrations were limited in scope and in numbers, but different Islamist groups quickly turned them into an armed rebellion against the government and the authority responded, probably with excessive force in some cases. However, any respected and responsible government would do the same to protect its people and territory against destabilising forces openly supported by Western countries.

When the UN adopted Resolution 1973 on 17 March, those peaceful demonstrations had already turned into armed rebellion. This was a turning point marking the start of the civil war in the country. The UN never fully investigated the situation to evaluate if it warranted humanitarian military intervention. The rebels formed their own administration in eastern Libya under the loose National Transitional Council (NTC), and were immediately recognised by France — the very country that led the attack on Libya on 19 March, 2011.

Desperate to fight the government troops who were approaching Benghazi, the NTC called on people to pick up arms. NTC Chairman Mustafa Abdul Jalil, later would admit that the NTC promised payment to all fighters. That was the second turning point in the civil war which gave rise to armed militias across the country. Knowing that they were protected by NATO air force, the fighters on the ground acted like the NTC’s ground troops with NATO as their air wing. The example in eastern Libya was copied all over the country in areas that the Gaddafi government lost.

In 2011, the armed groups consisted of only a few hundred, mostly armed with light arms and even then, they could have been brought under control. However, the NTC failed to act on this opportunity and worsened the situation by initiating payments to them. Financial incentives attracted more people, and militias appeared on paper generally labeled as “thuwar”, or revolutionaries, to claim the financial rewards. By the time the NTC handed over power to the elected assembly on 9 August, 2012, the number of those listed as thuwar exploded into the hundreds of thousands of fighters, growing from only 20,000 a few months earlier.

Arms availability and promises of cash were big motives for the usually young, unemployed and uneducated. They formed their own militias and join the competition for power and influence. At one pointed, the former UN envoy estimated that there were more than 20 million pieces of arms circulating in Libya. As of 2012, almost all sizeable militias were under some sort of government cover operating with impunity. The Central Shield Force, in western Libya, spearheaded the attack on Bani Walid in October 2012, after accusing the city of harbouring Gaddafi loyalists, which proved to be a false accusation. Libya Shield 1, in eastern Libya, was headed by Wisam Bin Hamid who was an Islamist commander in Benghazi and an ally of Al-Qaeda, linked to Ansar Al-Sharia’s founder and leader Mohamed Al-Zahawi. When Bin Hamid died in January 2017 in Benghazi, it was revealed that he was already listed as Daesh commander in the city.

Prior to the second elections, militias in Tripoli sieged parliament, forcing it to adopt the notorious Political Isolation Law depriving the bureaucracy of its best managers. The 2014 elections brought in two administrations — one in eastern Libya and another in the capital of Tripoli — dominated by Islamists of different allegiances. Here, retired General Haftar appeared on the scene in Benghazi, advancing his newly-formed Libyan National Army (LNA), now locked in a struggle with the GNA over the capital.

From 2011 to date, various countries have been supporting different sides in what has become a proxy war. The militias have streamlined into bigger groups, particularly in Tripoli allied with the GNA, and became stronger than before. When the GNA was formed in 2016 and moved into the capital, it had neither security forces nor an army. For its own security, it had to rely on local militias in return for cash and influence.

To fend off Haftar’s attack on Tripoli, the GNA was desperate for fighters and armour. Again, it depended on militias already controlling it, and repeated the defunct NTC’s earlier mistake. The current state of affairs became very complicated and benefitted only the militias. Should the LNA lose the fight, as it appears to be doing, and the GNA declares victory, the militias will become even more dominant than before, and unity in Libya will be threatened.

While the UN is searching for its seventh envoy, after the previous six failed to resolve the conflict, the situation on the ground has passed the point of no return. Any peace deal now is far more difficult to envisage. The actual decision of war and peace now rests in the hands of the militias and their foreign supporters.