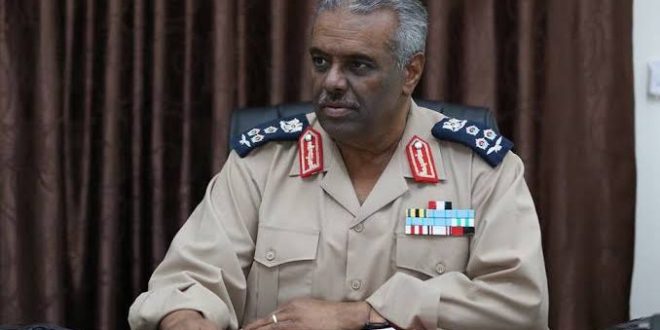 Eastern commander Khalifa Haftar is reported to be about to begin a series of air strikes on Turkish targets in Libya after suffering a week of setbacks in his fight against the Ankara-backed government in Tripoli.

“You are about to see the largest aerial campaign in Libyan history in the coming hours,” Haftar’s air force chief Saqr al-Jaroushi said in a statement.

“All Turkish positions and interests in all cities are legitimate targets for our airforce jets and we call on civilians to stay away from them.”

Haftar’s self-styled Libyan National Army (LNA), backed by the United Arab Emirates (UAE) and Egypt, launched an offensive to take the capital more than a year ago, initially making inroads in the city’s suburbs.

Thousands of Russian and Sudanese mercenaries, as well as Syrians, are also aiding Haftar, according to Western officials.

However, Turkey’s military intervention forced Haftar’s forces to withdraw from the strategic Watiya air base earlier this week and announce a partial withdrawal from the Tripoli frontlines.

Fathi Bashagha, the security chief of the internationally recognised government in Tripoli, told Bloomberg that at least eight Soviet-era jets have arrived in the east from a Russian airbase in Syria, possibly to assist in the air strikes.

Just hours after the threats from Haftar’s air force chief, a senior Turkish official told Bloomberg that Ankara would heavily retaliate against any attack on its interests in the country.

Turkey is well-prepared to defend its bases and other places under its protection using its drones and warships deployed near Tripoli, the senior Turkish official said.

Any targeting of Turkish personnel could bring retaliatory attacks, including against Haftar’s headquarters, the person said.

Haftar’s defeats in the past week were backed by a Turkish armed drone campaign that targeted Russian-made Pantsir air defence systems.

One of the batteries was captured intact and paraded in Tripoli on Wednesday.

Since 2014 the UAE and Egypt have provided the LNA with military equipment such as aircraft and helicopters, past UN reports have established.

The UAE built an air base in Al Khadim in eastern Libya, one such report said in 2017 and has supported Haftar with armed drone strikes.

The LNA has also used ageing Soviet-made jets from the air force of Muammar Gaddafi, toppled in 2011.

The poor condition of the older equipment, much of which had been in storage for nearly two decades, has made operations, maintenance and refurbishment a major challenge for Haftar’s air force.

Last year, Middle East Eye reported that as Haftar’s offensive against Tripoli began, the LNA had about 15 operational aircraft: eight MiG-21s (one was shot down over Tripoli by a Chinese-made air defence system), three MiG-23s, two Su-22s and two Mirage F1s.

It also maintains a L-39, a Czechoslovakian-built jet trainer, which made its first flight in 2018 after more than 31 years in storage, for training.

Bashagha said his Government of National Accord in Tripoli had received information that at least six MiG 29s and two Sukhoi 24s had flown into the east from the Russian-controlled Hmeimim Air Base in Syria, escorted by two SU-35 Russian airforce jets.

Reports of the possible support from Moscow came as Russian Foreign Minister Sergei Lavrov and Turkish Foreign Minister Mevlut Cavusoglu backed an immediate ceasefire in Libya during a phone call on Thursday, Russia’s Foreign Ministry said in a statement.

The two diplomats also supported the resumption of the United Nations political process in Libya, the statement said.

Haftar ‘on his way out’

On Tuesday, Mada Masr, an independent Egyptian online newspaper, reported that Egypt and the UAE had decided to abandon Haftar following his recent setbacks.

Egypt and the UAE have decided Haftar is “on his way out,” a Libyan political source close to the general told Mada Masr.

An Egyptian official, who spoke to Mada Masr on condition of anonymity, said: “The question today for the Egypt-UAE-France alliance that has supported Haftar to this point is to decide on their next move in view of Haftar’s defeat. No one can bet on Haftar again.”

Earlier this week, the United Nations acting Libya envoy Stephanie Williams warned of a possible escalation of fighting in the oil-rich country that has witnessed a series of conflicts since the 2011 revolt against Gaddafi.