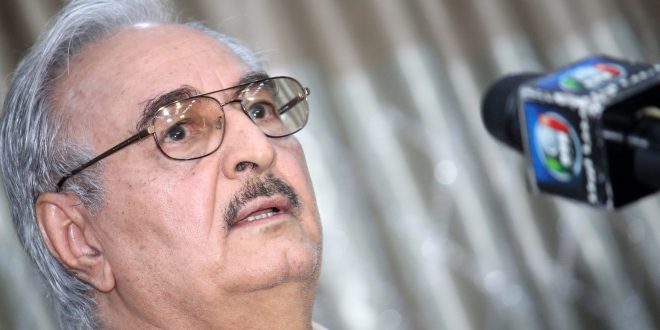 Libyan renegade military commander Khalifa Haftar called on his loyalist forces on Saturday to rally against Turkey, a key ally of his UN-recognised rivals in Tripoli, after suffering heavy losses.

In an audio message reviewed by Reuters, Haftar urged his supporters to fight the “colonial” intervention by Turkey “until its defeat”, in a reference to the historic Ottoman rule of Libya.

“You are creating glory while fighting the odious coloniser greedy for our wealth,” Haftar said. “And you are waging war on all fronts, a war in which there is nothing but victory.”

Haftar’s voice clip emerged as US President Donald Trump held a phone call with Turkish counterpart Tayyip Erdogan, where he called for “a rapid de-escalation” of the conflict in Libya.

The two leaders conversed following the ousting of Haftar’s Libyan National Army from their only west-Libya airbase and several strategic towns, which prompted threats of retaliation from the retreating militiaman.

Libya’s internationally recognised Government of National Accord (GNA) and allies recently recaptured the key air base which turned the tide of the Tripoli conflict with LNA.

Turkish Foreign Minister Mevlut Cavusoglu was quoted by Reuters saying that his country had “changed the balance” in Libya and averted a “full-blown civil war.”

“The only solution in Libya is a political solution and Haftar needs to understand this,” Mevlut said, according to the agency.

The eastern-Libya based Haftar launched the offensive on the capital over a year ago. Haftar’s forces – backed by the United Arab Emirates, Egypt and Russia – said they would carry out a massive air campaign in response to the GNA operation.

According to Reuters, the LNA said it had withdrawn from some areas after GNA’s advancements, but had also staged an ambush at Yarmouk military camp in Tripoli, where rival combatants were captured or killed.

The LNA threats against Turkey were not the first to surface this week. On Thursday, a Bloomberg report cited Haftar’s air force chief, Saqr al-Jaroushi, vowing to strike Turkish military positions in Libya.

“You are about to see the largest aerial campaign in Libyan history in the coming hours,” Jaroushi was quoted as saying. “All Turkish positions and interests in all cities are legitimate targets for our airforce jets and we call on civilians to stay away from them.”

International Relations and CooperationSecurity ForcesSecurity Situation
All
2020-05-24
asaeid
Previous UNSMIL: We are concerned about death sentences issued in Eastern Libya
Next Russian fighters reportedly flown out of western Libya after Haftar retreat