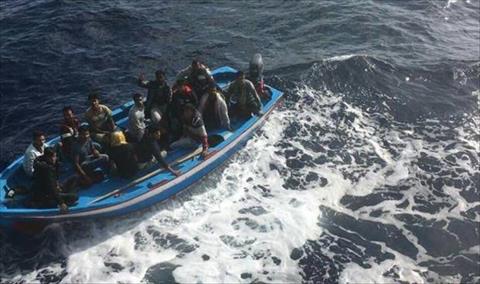 Libya’s coastguard intercepted about 400 Europe-bound migrants off the country’s Mediterranean coast over the past two days, and brought them to detention centres near the capital Tripoli.

Safa Msehli, a spokeswoman for the UN’s International Organization for Migration (IOM), said the refugees and asylum seekers were taken to the al-Nasser detention facility in the town of Zawya, west of Tripoli.

The UN refugee agency in Libya said two people died of the 315 who were intercepted and returned to Tripoli early on Monday. Their bodies were recovered at sea, it added.

About 85 other migrants were captured earlier by the Libyan coastguard, bringing the total to about 1,000 people who have attempted the crossing this month.

Mselhi said departures from Libya have increased, which is “especially worrying amid a sharp decrease in … search and rescue capacity”.

Since the outbreak of the coronavirus pandemic, major maritime rescue charities, such as Ocean Viking and Sea-Watch, have suspended migrant rescue operations. Also, travel disruptions have forced the UN refugee and migration agencies to halt their resettlement flights for the most vulnerable people.

The pandemic and a surge in fighting around Tripoli have added to the problems for thousands of people trying to pass through the North African country en route to Europe.

Libya, which descended into chaos following the 2011 uprising that toppled and killed longtime dictator Muammar Gadaffi, has emerged as a major transit point for African and Arab migrants fleeing war and poverty to Europe.

Most make the perilous journey in ill-equipped and unsafe rubber boats. The IOM said last month its estimated death toll among migrants who have tried to cross the Mediterranean Sea since 2014 surpassed 20,000.

In recent years, the European Union has partnered with the coastguard and other Libyan forces to stop the flow of migrants. Rights groups say those efforts have left many at the mercy of brutal armed groups or confined in squalid and overcrowded detention centres that lack adequate food and water.

The EU agreed earlier this year to end an anti-migrant smuggler operation that involved solely surveillance aircraft and instead deployed military vessels to concentrate on upholding a widely flouted UN arms embargo that is considered key to winding down Libya’s relentless war.